It is in fact, ‘Thomas Crapper Day’ and marks the anniversary of toilet technician Thomas Crapper’s death in 1910. To mark this day, NI Water is asking customers to reflect on where we might be today without a modern sewerage system, and consider how they can help ensure it works properly. 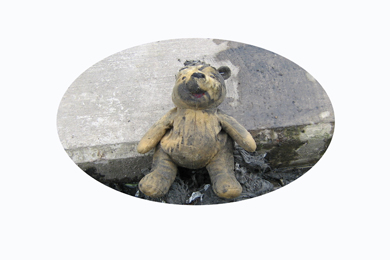 No hiding place, A POOH Bear found stuffed down a toilet drain by the Dirty Dozen team.[/caption]

Thomas Crapper, who many mistake for inventing the toilet, was one of the pioneers in the bathroom fitting business in the 1800’s, and did much to increase the popularity of the toilet and sanitary plumbing. He also developed some important related inventions such as the ballcock.

As the popularity of the flush toilet grew, so did the rubbish that was put down it.  Popular folklore claims people actually made a living by scavenging early sewers for items such as jewellery, cutlery and coins, as well as bits of cloth and metal.

“History is repeating itself today, as NI Water is still finding inappropriate items dumped down the sewer such as wedding rings, money, nappies, building materials, and even a child’s scooter washing into pumping stations and treatment works, as well as the ‘Dirty Dozen’.

“The ‘Dirty Dozen’ are the twelve most common items the public flush and dump down our sewers.

“We are literally fighting a daily battle to clear blocked sewers at a cost of over £1.7 million every year. A new tanker and state of the art CCTV equipment has been purchased and a ‘dirty dozen’ team has been set up to tackle blockages caused by the notorious gang and the sidekicks they hire.

“However, we will never win this battle on our own.  We need the support of the public to work with us to dispose of these items in the bin rather than down the sewer.  Together we can beat the ‘Dirty Dozen’ and keep our sewers running freely!”