<![CDATA[ <p style="text-align: justify;">THE coastal area of east and south County Down has been severely battered by storms over the past two days and in the past day tidal surges have threated homes, businesses and local infrastructure such as roads, lighting, water and sewerage.

Many roads have been closed and dangers to persons travelling especially at night are significant due to flloding, debris and fallen trees. A number of severe weather warnings have been issued and the police are co-ordinating a multi-agency approach to handing the weather crisis. 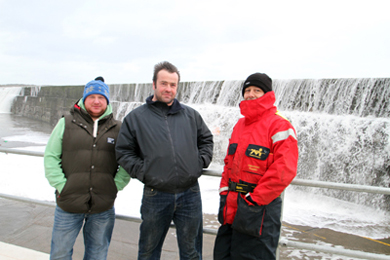 Expressing his concern about the adverse weather conditions, Councillor Dermot Curran said: “I have travelled along the coast today as much as I could to assess what is happening. There is widespread damage and disruption and there will no doubt be more to come.

“In Ballyhornan local residents were busy trying to replace a protection wall that had collapsed with the use of a digger when their homes were threatened by flooding. The cliffs overlooking Ballyhornan beach have been badly eroded with collapses and I am deeply worried that eventually the road to Kilclief will also collapse.

“I wrote to DRD Minister Danny Kennedy earlier last year about this and he said that nothing could be done in the nesting season. It is now winter. This needs to be looked at urgently.

“Also, in Killough, I saw the damage the flood had done to the houses in Fisherman’s Row. They are very vulnerable to flooding and we have to look at what casn be done in the future – possible a wall could be built. The coast road too along Rossglass was badly flooded and much debris was thrown on to the road. As it drained away, there were poles of seaweed, stones and sand on the road… a serious danger to motorists driving especially at night. This will need to get cleaned up. There was some damage too to the wall at the Killough bridge.

“People need to heed the severe weather wannings and take the advice given. Conditions especially for the elderly can be treacherous. This tidal flood event has been an important learning curve and Council will have to take the many leassons on board. For example, was there enough sand bags available to protect local homes?

“There are still a couple of days to go of this bad weather so I hope everyone remains safe until is passes. We have to look after each other is such difficult times.” 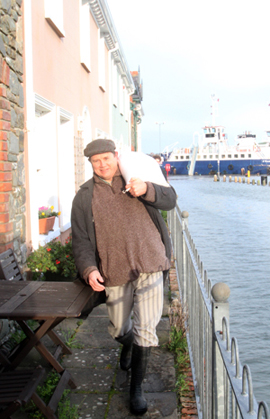 Councillor Cadogan Enright also was out checking around Down District and said: “I found the response of Roads Service and Council to the tidal surge today good in my area with sandbags being available in most Lecale villages… with two exceptions.

“Firstly, assistance arrived too late in Strangford village and several premises were left flooded out unnecessarily – presumably we can get the timings right on Sunday – I have contacted the flood relief centre to make sure there is a more timely response here for the next two days especially Sunday.
“”Secondly, the Roads Service would not help Coney Island as the road is deemed ‘private’ ie unadopted – the sea wall was partly breached in two places. So it seems to me it’s down to Down District Council to protect ratepayers in Coney Island – they had no assistance today  from the DRD.
“In advance of Sunday, I have asked the Council that it needs to leave sufficient sand bags to fill the two holes at Coney Island  – probably around 20 bags.
“There were plenty of dramatic scenes with the football pitch at Killough being under water  and the bridge over Station Road between Killough and Ardglass damaged on the Killough side.
“I was impressed with the Roads Service helping (in particular) Fishermans Row in Killough but the homes there will be under threat again over the next couple of days.
“In Strangford, I was amazed at the extent the water had crept up over the Green area and was threatening to flood the central area and homes adjacent to the ferry reminal. The ferry itself had to be suspended for a while. One work store was flooded as were a couple of vacant houses. It will be a difficult time over the next two days and hopefully the wind conditions don’t change to make matters worse with increased flooding risks.
[caption id="attachment_45814" align="alignleft" width="370"] 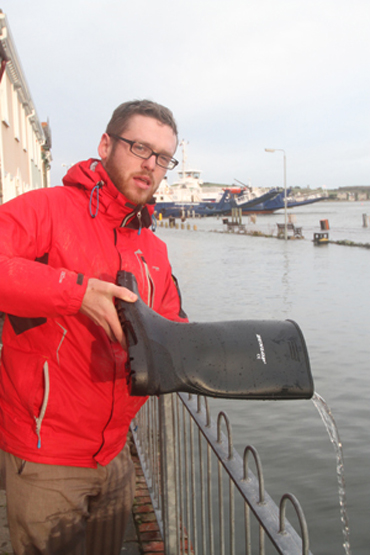 Councillor Gareth Sharvin was in Strangford helping as the tidal surge threatened homes. [/caption] Strangford resident Brendan Kerr whose terraced seafront home looks on to the Green in Strangford said: “This tidal surge is really incredible. I looked out the door today and saw a loose small boat float past my door followed by a large flowerpot.
“I can’t remember in recent years thistidal surge  happening but there was a very high tide in 2001. We have not been flooded yet this year so I’m hoping the worst of the surge has passed. I know there are another two very high tides to come so we will certaonly be ready with our sandbags in case the worst happens”.
***

Speaking in response to the potential flooding risk in Down District, Council Chairman, Councillor Maria McCarthy, said, “A potential storm surge has been predicted for coastal areas in Down District including Newcastle, Ardglass, Killough and Strangford. Down District Council is working with DRD Roads Service, Rivers Agency and other local government agencies to deal with any emergencies arising from incidents of flooding. Council staff are currently working on the ground and have local recreation/community centres on standby should an emergency rest centre be required for any of our citizens. “The Council has a limited supply of sandbags and will be distributing these to the most vulnerable areas. “In an emergency, Down District residents are encouraged to call the Flood Line number on 0300 2000 100 or alternatively visit www.downdc.gov.uk for practical advice on how to deal with flooding issues. “Finally, I would remind citizens to keep safe in adverse weather and stay away from quay side and promenade areas.”

Flooding Incident Line – 0300 2000 100. There is also information about what to do if your house does suffer flood damage. 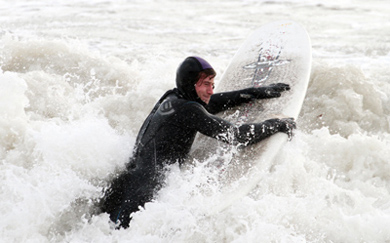 Making the best of the bad weather. Mark Lappin battles his way through the surf at Coney Island.[/caption]

A coastal surge is anticipated on Sunday (5 January) and Monday (6 January) which has the potential to cause flooding in a number of areas across the country.

Th esurges are caused by a combination of low pressure zones over the Atlantic close to Ireland, a strong southerly wind and spring tides.

Over the weekend all members of the public are asked to stay away from coastal paths and walkways and to drive with extreme caution.

Preparing for a flood

To help you reduce the impact of flooding on your home, you should:

*   know where to turn off your electricity and/or gas

*   move your valuable possessions to safety

*   ensure your insurance provides cover against flood damage to property

*   keep a list of useful contact numbers such as your local council, emergency services and your insurance company

You can get more details about how to prepare for a flood at the page below:

*   Preparing for a flood (property and housing section) 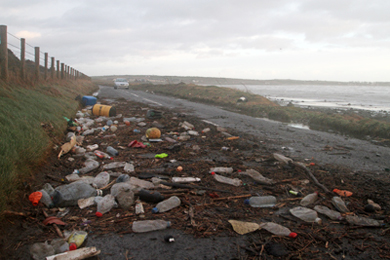 Northern Ireland’s Flooding Incident Line is available 24 hours a day, every day. You can report flooding problems on roads or burst water mains and blocked drains.

When you ring the flooding incident line, a member of staff will:

*   take all your details

This is a non-emergency number, so if you are in danger, call the emergency services on 999.

You can get more information about flooding at the following link:

*   Flooding in your area (property and housing section)

*   Preparing for a flood (property and housing section)

Insurance claims after a flood

If you have different insurers for the structure of your home and your content, make sure you contact them both.

If you live in rented accommodation, the landlord will deal with the structure of your home. For content claims contact your own insurer.

You can find out more at the page below:

Be aware of hidden dangers under the water, such as missing manhole covers, and guard against the possibility of falling into fast-flowing water.

The risk of becoming ill after contact with flood water is generally low. However, as it is not always clear whether flood water is contaminated, you should assume that it is and take appropriate precautions.

Precautions you can take

There are a number of precautions to prevent health problems if your home floods:

*   wherever possible try to avoid coming into direct contact with floodwater

*   do not let children play in floodwater

*   use rubber gloves when cleaning up

*   wash hands after being in contact with flood water, sewage or anything contaminated by these

*   clean toys that have been in flood water with disinfectant

*   contact your GP if you, or a relative, develops a stomach upset following flooding

The Police Commander in charge of the multi- agency response to today’s flood threat has thanked the various partner agencies and the community for their efforts and vigilance. 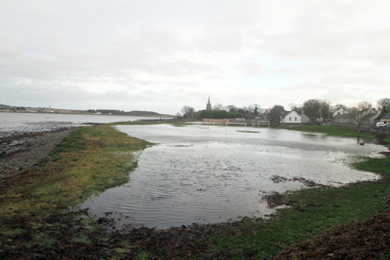 The Killough football playpark under water.[/caption]

Although today’s tides and conditions did not result in widespread, serious flooding, Assistant Chief Constable Stephen Martin warned that the risk remained over the next three days, particularly on Sunday and Monday.

He said: “Over the past few hours we have experienced extreme tidal surges in many coastal areas across Northern Ireland. In preparing for these types of events we must plan for the worst but thankfully, on this occasion, our defences held in most areas.

“Unfortunately we’re not over this extreme weather yet. We are anticipating another higher than usual high tide around mid-day on Sunday and Monday afternoon’s high tide has the potential again to cause widespread flooding.

“We will remain on high alert over the coming days and we would urge the public to do the same. We would ask people to continue avoiding coastal paths and to drive with extreme caution over the next few days. We would advise people to retain their sandbags for potential use again on Sunday and Monday.

“Weather forecasting is subject to continual change and we will continue to work with our partner agencies and engage with local communities and the media as we get a clearer indication of the coming weather patterns.

“I would like to take this opportunity to thank all of our partner agencies who have worked tirelessly over the past day and a half to ensure that this operation has gone smoothly to date.

“I’d like to re-emphasise that over the coming days, people can either call:

or the Police non-emergency line on 0845 600 8000 if they would like advice or support around potential flooding.”