<![CDATA[ <p style="text-align: justify;" align="center">NI21 MLA for South Down John McCallister has expressed concern about news that dementia survival rates in Northern Ireland are poorer than some cancers.

Mr McCallister was speaking after attending a launch event in Parliament Buildings last week for a new state of the art Dementia and Nursing Care home in Millisle. 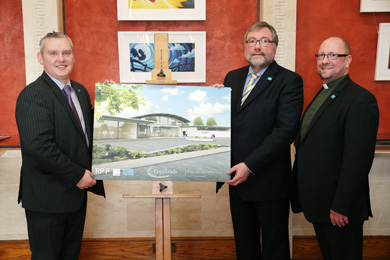 The local MLA heard from a Queen’s Professor who explained how dementia is an incurable, terminal condition with a prognosis worse than some cancers.

“For example average survival for people diagnosed with Alzheimer’s disease is 5.9 years. People are living longer nowadays and because of that we will see a huge rise in numbers of people living with dementia over the next twenty years.”

However, Mr McCallister welcomed the news that there are positive signs and Northern Ireland does have one of the highest diagnosis rates in the UK.

He stressed the earlier we can get a diagnosis for a patient, the better the outcomes for them and he urged anyone with concerns to see their GP immediately.

Mr McCallister said: “Belfast Central Mission’s plans to build the new Copelands Home is an innovative approach and is a positive development in dementia care because it encourages people to live independently for as long as possible.

“I would like to see more facilities like this locally as here in South Down we have a large ageing population. Growing old is something that will come to us all, and therefore dementia care is an issue we must all think about. It will bring further pressures on our health and social care services and we need to ensure we do everything in our power to promote health and wellbeing, social inclusion and services to support the independence of older people.”