With the prevalence of the potentially life-threatening meningococcal infection at its highest during the winter, the Public Health Agency (PHA) is calling for people to make themselves aware of the all signs and symptoms of the condition, as a rash is not the only sign.

Meningitis can kill in a matter of hours and it is very fast moving.

Dr Richard Smithson, Consultant in Health Protection, PHA, explained: “Meningococcal infection, which can cause meningitis and septicaemia (blood poisoning), can occur at any time of year, but is seen most frequently in the winter. It is a serious disease, so it is vital everyone becomes more vigilant of the signs and symptoms to be able to detect the disease earlier, to allow early intervention. 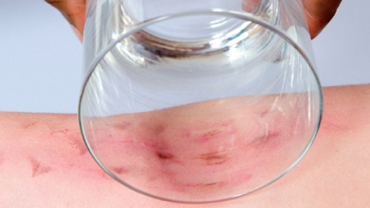 Learn how to do the glass test for meningitis – it could save a life or a huge amount of suffering.[/caption]

“A very important sign is a rash that does not disappear if a glass is pressed against it. If someone develops this, they need urgent medical attention. It can appear anywhere on the body so it is important to check under clothing. However, a rash doesn’t always appear when someone has meningococcal infection, so don’t wait for a rash before seeking medical attention if other signs are present. Meningitis on its own does not always have a rash.

“Other symptoms are often non-specific. In the early stages it could be mistaken for other illnesses such as flu, although with meningitis the person tends to be sicker than with these other conditions. However, the disease can come on very quickly and it is important to seek urgent medical attention if you think meningitis is a possibility.”

Meningococcal infection can occur at any age but is more common in young children under four years of age and in the late teenage years. Early symptoms of the disease may include:

*  sudden onset of high fever; *  a severe and worsening headache without any other obvious cause; *  severe neck stiffness; *  dislike of bright lights; *  very cold hands and feet; *  drowsiness that can deteriorate so someone is difficult to wake or may even be unconscious; *  a rash that does not fade when pressed with a glass (this is due to bleeding under the skin).

Babies with meningococcal disease tend to be irritable when picked up and have a high pitched cry, stiff body and jerking movements.

“It is being offered to first time university students as they are more at risk of getting meningitis as just after starting university they are mixing closely with lots of new people, some of whom may unknowingly carry the meningococcal bacteria. It is therefore important that students who have just started university have the vaccination to help protect them against the disease.”

Further information on meningitis can be found at:

12 Marathons In 12 Months In Aid Of Air Ambulance NI

Killough Win Over Dunloy Sees Them Through In Irish Cup

FSB Poll Gives A Thumbs Down For Covid Passports

12 Marathons In 12 Months In Aid Of Air Ambulance NI