Councillor Walker was first elected to Down District Council in 2005 and is serving his first term as Chairman of Council.  He succeeds Councillor Maria McCarthy as First Citizen. 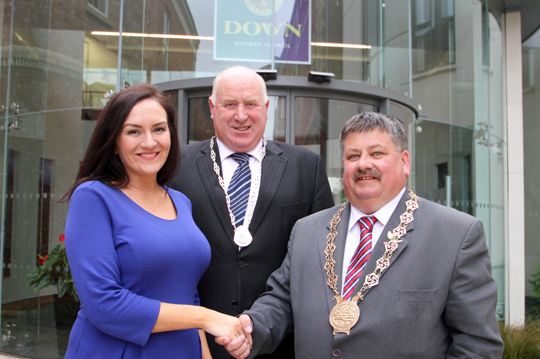 Speaking about the year ahead Councillor Walker commented: “This year, I am giving my commitment to work with the young people of our district.  They are our future, and I wish to showcase their talents and the good work done by them.  I will also recognise the guidance and leadership provided to our youth.

“This is an extremely important year to be the Chairman of Down District Council with the Review of Public Administration taking effect.  The new Shadow Council has now been elected, and I am pleased that I have been elected to the new Council.

“I will play my part in shaping how public services, balanced with the best value for money with local rates, will be delivered.  I look forward to us all working together for the good of all our communities.”

Councillor McCarthy said in her closing remarks as the penultimate Chairman: “This is the final Annual General Meeting of Down District Council after 41 years.  It is a very historic occasion which I feel hugely privileged to be part of.  The first chairman of Council back in 1973 was Eddie McVeigh (UUP) and the vice chair Eddie McGrady of the SDLP…both good men, who have passed away in recent years.

“However, I am delighted to have Councillor Dermot Curran in our presence tonight, who has been with the Council since its inception, and no doubt will bring a wealth of knowledge and experience to the new Council.”

Councillor McCarthy conveyed her gratitude to the Vice Chairman, Councillor Gareth Sharvin and her colleagues for their support over the past year.  She also thanked the Chief Executive and Council officers for their guidance and professionalism throughout the year in delivering the Council’s services.

Councillor Gareth Sharvin, who also stepped down as the Vice Chairman reflected on his year as Vice-chairman, said: “It has been a challenging year, but one I have enjoyed very much. It has been a year of youth, community, charity, business and tourism.  This year we have witnessed the beginning of the leisure centre, Downpatrick’s High Cross extension, Saintfield community centre and the numerous play parks, landscaping and initiatives.  I have enjoyed working together with everyone as we undertake to make change for the better.”

Ulster Unionist Councillor Desmond Patterson was elected Vice-Chairman and will support Councillor Walker in carrying out the official engagements and duties during his term in office.

Cllr Patterson said: “I am delighted to be taking up this appointment at a pivotal time for Down District Council”, said Councillor Patterson.  “I look forward to continuing my duty to serve the local people to the best of my ability.  I believe that politics and government at every level should be making a difference and improving the daily lives of people.  I look forward to continuing my work to help realise the potential of Down District for the benefit of individuals, businesses and our local economy.“