<![CDATA[ <p style="text-align: justify;">KILLYEAGH residents are deeply alarmed at life saving equipment being thrown into the harbour by local youths. Life rings have been removed from their posts and Rowallene Councillor Billy Walker has expressed his anger at the repeated iccurances of this vandalism.

A local resident speaking to Down News said: “A gang of around 30 youngsters seems to congregate around here in the evening anytime. They can at times get very unruly and  have thrown the life rings into the water. Some residents have been badly annoyed by them and something needs to be done especially before someone loses a life.” 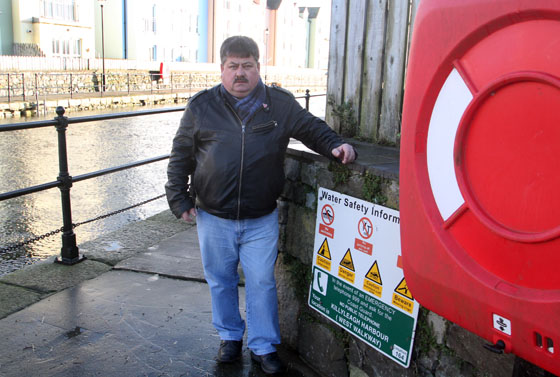 Killlyleagh Councillor Billy Walker is deeply concerned about vandalism to life saving equipment at Killyeagh harbour after another lifering was removed from its mount.[/caption]

Councillor Walker said that for the last few days the young people had been gathering around the harbour area. “They are mostly young teeenagers. They really need more parental control. Ultimately that is the answer.

“Lifebelts have been removed from the much used walkway area at the harbour and it is just a matter of time before a serious accident happens. This cannot go on. Enough is enough!

“This past  few days has seen every high tides and winds and this increases the danger around the shore and harbour area. I am just alarmed at the thought of what could happen if someone does fall into the water. Parents need to accept resonsibility for their young teenagers – they should not cover up for them when the police comes knocking on their door. I honestly think we are at the stage when tough action is called for. There should be a mandatory custodial sentance for anyone damaging lifesaving equipment. An example needs to be set so that these young people get the nessage that this is very wrong to destroy public life saving equilment.

“This equipment has to be replced by Down District Council and it is at a cost to the local ratepayers.

“In fact I am so annoyed with this recent outburst in Killyleagh that I am going to write to the Minister of Justice and ask him to review what legislation exists in addressing this sort of serious matter. It may be that we need a special piece of legislation to cover unruly, maliscious  activity attacking public safety.

“There is work ongoing in Killyleagh at the moment to get a community safety action plan rolled out but we do need to deal with this very important issue once and for all before it is too late.”

Councillor Walker also commented on the recent hoax call to the emergency services in Newcastle which led to police, ambulance, HM Coastguard, RNLI, the Irish Army, and other services being launched at huge expense when they are already overstretched due to bad weather.

He said: “There needs to be clear and specific legislation in place to prevent people from endagering public safety in thee ways and I will be following through on this. If it transpires that the area is not well covered in legislation, my party, the DUP, will chase this up at the Assembly. Our Strangford MP Jim Shannon will also lobby for this.

“We need to get tough of these disruptive individuals… they should be getting mandatory custodial sentences. These acts are malicious, are very costly, and can cost lives and injury to others. These individuals need to be put behind bars as an example. We will try and do what we can at community level but I am of the opinion more possibly could be done at government level” added Cllr Walker.