65 golfers tee-ed up to take party in the event supporting the Down and Lisburn Alzeihmer’s Society and the Killyleagh Youth Club drop-in. 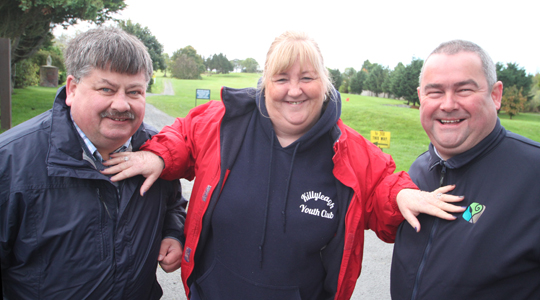 Photos For The Golf Showdown

Whilst the hardened golfers played their 18 holes, both Billy and Terry decided to cut to the chase and see who the best golfer was over two holes. And given that both had never actually played golf in their lives before ie never swung a golf club, it was certainly an extraordinary challenge to remember. 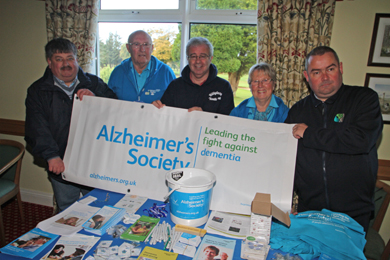 In the first hole, both managed to get off the tee box (eventually), and  Terry said after the match: “We left the course in good order. We thought there would have been divits everywhere but in fact there was only the one which was great.”

As both squared up to the ball, it was Billy who won the first hole on 8 shots to Terry’s 15. But in the second crunch hole, as the deadly duo locked horns, Terry pitched into a bunker and found himself knee in sand after several shots leaving Billy the winner of the second hole on 13 shots to Terry’s 19.

And adjudicator Chris Hagan who kept an eagle eye on the pair, revealed the total number of air shots taken (ie completely missing the ball !) – Terry had 6 to Billy’s 3. 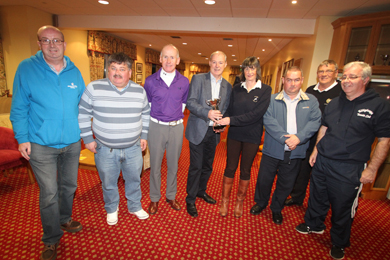 Following on from their boxing challenge last year in the Killyleagh Bridge Centre to support PIPS and the Killyleagh Youth Club Drop-In, DUP Councillor Walker, said: “I would like to thank all of the participants and the sponsors and also the management at Bright Castle Golf Club for supporting and hosting this charity event. The two charities we are supporting this year are the Alzhheimers Society and the Killyleagh Drop-In.

“Terry and I have been friends for years and and despite being from different political parties, we have proven that if we can bridge the gap and reach out to our communities, so can our representatives at Stormont! If we all worked together then this would be a better place. We both put our communities first in our priorities.

“We did want to challenge TV presenter Stephen Nolan in the ring after our boxing match but the BBC would not allow him to do this. We look forward to our challenges next year for charity.” 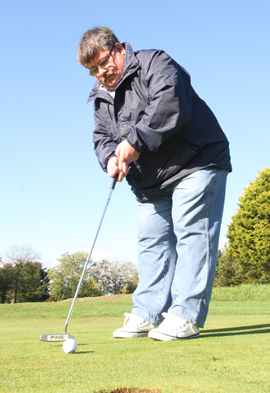 Cllr BillyWalker strokes the ball into the hole for a victory over Terry Andrews.[/caption]

Councillor Terry Andrews, magnaminous in defeat, added: “Today was an excellent day… the weather was superb, the fresh air was invigorating and the food at Bright Castle Golf Club was excellent. So I’d too like to thank all who supported the event and who turned up today. And a special thank you to Liam Hannaway, the chief executive of Newry Mourne and Down District Council, for coming along to give out the prizes.”

Newry Mourne and Down chied executive Liam Hannaway explained: “Both Terry and Billy have tried to reach out across the wide area that our council area spans to get to know the other local councillors and the different parts of the council area. They have even been to my own Crossmaglen area on a visit. They have clearly shown their personal commitment… their hearts are definitely in their communities.”

Chris Hagan, leader at the Killyleagh Youth Club Drop-In at the Bridge Centre, said: “These two councillors have made a huge effort in helping the youth club. They have helped get 60-70 youngsters of the streets on a Friday evening which is a great contribution to addressing some of the social problems in Killyleagh.

“Both Terry and Billy have big hearts and they are leading by example. We would like to thank all the sponsors and players and everyone at Bright Castle Golf Club. The response has been amazing.” 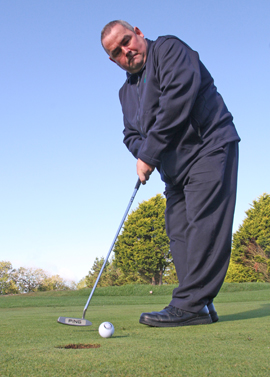 Brian Patterson, a volunteer with the Down And Lisburn Alzheimers Society branch, said: “We really appreciate the help and support from everyone in this event. Dementia is a serious illness which will affect one in three of us in our lives. These funds will go towards supporting the carers and helping to provide some respite for them when they are putting so much into the care of their own loved ones.”

A draw took place after the prize presentation and one of the many glittering prizes, a two day ticket to the K Club for the 2016 Irish Open was won by Dale Baker.