<![CDATA[THERE will be a star studded Festival of Flight on Saturday 10 August in Newcastle and we won’t be disappointed! Further to the recent announcement confirming that the Red Arrows will return to the fantastic arena of Dundrum Bay along with the amazing Typhoon, Down District Council organising the event have another fabulous announcement! The Avro Vulcan XH558 returned to flight on 18 October 2007, following an award winning restoration programme and as the last airworthy Vulcan, she returned triumphantly to the air display circuit in 2008 and has been a significant crowd puller attracting over ten million people at over 60 locations. [caption id="attachment_38225" align="alignleft" width="390"]<a href="http://www.downnews.co.uk/wp-content/uploads/2013/04/Vulcan_Pic_for_FOF.jpg"> 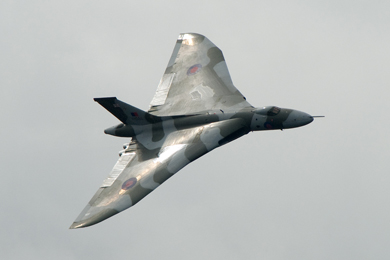 A Vulcan bomber will thunder over the skies of Newcastle this summer during the Festival of Flight.[/caption] The Vulcan to the Sky Trust (VTTST) provides an education programme very much about honoring the past… creating an atmosphere of learning and discovery to explore the history of Vulcan XH558, its extraordinarily advanced British design and technology, and its importance in the context of The Cold War. But, most importantly, the Vulcan programme is  about looking forward…inspiring the future with much emphasis on science, engineering, design, technology and innovation. Jeff Salter, Flight Director, added: “Newcastle Festival of Flight will make a little bit of history as VTTST announced in October last year that 2013 will be the mighty Vulcan’s final flying year, and our last chance to bring it to Northern Ireland. We all hope that it will not come to this as the Trust has put up a mighty battle of its own to bring the aircraft back to flying condition.  We just could not let this significant year pass Northern Ireland by. “The Vulcan last visited Northern Ireland in 1985 at Belfast International Airport’s last anniversary air display , so it is amazing to think that we will have this iconic delta wing Cold War warrior flying here again.” Michael Lipsett, Down District Council Director of Recreation and Community Services said: “This is a further development of the already immensely successful Festival of Flight that attracts tens of thousands of visitors to the seaside town in August. The expansion of the air displays has been made possible by the continued support of the B/E Aerospace plant in Kilkeel. This year we can announce the participation of a new sponsor, Belfast International Airport Ltd (BIAL), who are thrilled that we have secured the Vulcan to display in their 50th anniversary year.” He confirmed that the financial benefits, in-kind and effort from the local business, large and small, is central to the success of this much-appreciated festival which is a core element of  the  Summer events programme in Newcastle.  In addition, the 2013 Festival of Flight is part funded by the Northern Ireland Tourism Board through their National Event Funding Programme. Mr Lipsett aded: “Together, we all look forward to an event which will have a positive impact on the local economy and a truly unique experience! “The programme is currently being finalised and with some of the information still under wraps, you will need to keep an eye on the media and our www.facebook.com/DownFestivals  page for all the latest information on what’s in store for all the spectators!” A week long programme including the spectacular air displays alongside numerous exhibitions, music, street entertainment, vintage vehicles and finishing with an open air concert on the promenade for this crowd-pleasing event is to be launched shortly. Information about all the events in the 2013 Festival of Flight will be available shortly at www.downdc.gov.uk,  Contact our Festival Office on 028 4372 2222. To find out more about Festival of Flight sponsors B/E Aerospace, visit www.beaerospace.com To find out more about Belfast International Airport Ltd, visit www.belfastairport.com]]>