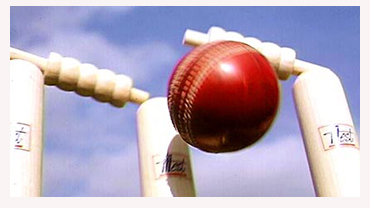 The favourites Donaghcloney batted first and Stuart Campbell, who bowls at decent pace, got the highly rated Yousaf bowled out in the 5th over. However, Donaghcloney  regrouped playing sensible cricket with loads of singles as the villagers’ fielding suffered on the hot evening.

Donaghcloney posted 114 for three, with bowling figures William Orr 1 for 12, Conor Gibson 1 for 34, and Campbell 1 for 10, the pick of the attack.

Dundrum are unbeaten in 5 games this year, mainly due to very good aggressive attacking opening from Greg Hutley and cup captain Stuart Campbell with 44 runs coming in nine overs with Greg bowled for 16.

The good home support were treated to a masterclass from the livewire Conor Gibson with his no-nonsense ‘see ball hit ball’ style, blasting a super 36 not out including five boundaries. But Stuart Campbell was hampered by two very hard blows on the inner thigh and he showed grit and determination as captain and playing a fantastic knock of 54 not out including four boundaries. And he had also a cracking six over wide long on as Dundrum won by 9 wickets and three overs to spare.

Donaghcloney were the best bowling and fielding team I’ve ever seen in the Meadow with young Luke Allison a superb quick bowler in action who is only 13 playing at his highest level.

But it was Dundrum that advanced to the semi final on Friday 17th in the Meadow.