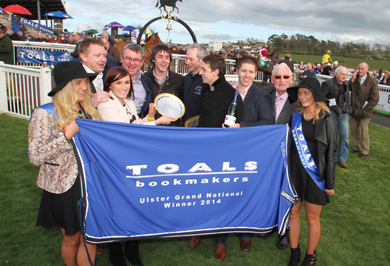 The weather was fair and the going was soft. A couple of stablehands following a walk around the course earlier on the day had commented there was a patch on the back of the course where it was particularly soft adding to the potential drama and excitement on Ulster National day in Downpatrick.

Unoccupied with Philip Enright aboard went past the post first beating the Paul Carberry partnered Hidden Horizons by 1 ½ lengths, but immediately a stewards enquiry was announced into the closing stages of the race.

The principal pair had drawn twenty lengths clear of rivals on the downhill run after jumping the regulation fence and Unoccupied trained by Eoghan O’Grady had got the better of the Stuart Crawford trained Hidden Horizons at the last fence.

However, after 3 ½ miles and the uphill finish took its toll and the stewards decided after a prolonged enquiry, the winner had badly interfered with the Larne horse when challenging close to the winning line and to the delight of the large contingent of local supporters waiting anxiously in the paddock – the result went their way and they errupted with delight.

VIEW IMAGES OF THE RACE MEETING ON THIS LINK 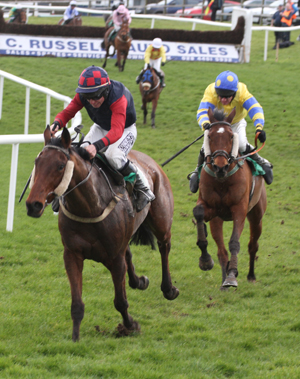 A stewards’ inquiry was held after the Toals Ulster Grand National when Unoccupied appeared to drift across Paul Carberry riding Hidden Horizons going into the home straight.[/caption]

Stuart Crawford said of his big winner, having also landed the St Patricks Day feature on Monday at the Maze:  “She always runs an honest race. She has only ran badly on one occasion. The ground was just OK for her. I had said to the owners after she was placed here that the Ulster National would be her target.

“She has won a point to point at Armagh which has the same stiff uphill. You would prefer to win it properly but I thought she was always getting there. She always finishes her races well and I thought she’d have got up with a clear run but I feel sorry for the other lads who ended up second.”

Unoccupied would have supplied trainer Eoghan O’Grady with his biggest success todate and had finished runner- up in the Cork National, but the connections were anxious about the result of the stewards enquiry as they waited in the winners enclosure with the ‘winning’ photographs having already been taken.   The winner is the stewards room who saw Paul Carberry register a treble on National day.

Racing got underway when Taglietelle with Paul Carberry aboard registered a very easy twelve length victory in the opener for trainer Gordon Elliott relegating favourite Sunsettorise into second.

Elliott advised post-race:  “Paul gave him a great ride. He never jumped at Navan but I think he’ll be a better horse on better ground and he’s definitely not a bad type.”   The trainer/rider duo quickly doubled up when Un Beau Matin again was the very easy winner of the novice hurdle in the Gigginstown Stud/Michael O’Leary colours with the race providing just four runner due to withdrawals. The winner made all the running and cantered  to success – the only mistake a peck on landing after the final flight. 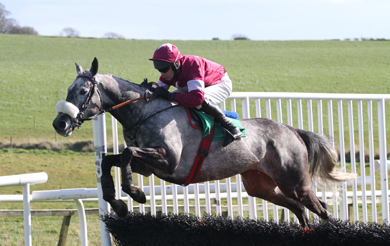 Un Beau Matin ridden by Paul Carberry jumps in the first race in Downpatrick to win the race.[/caption]

In contrast to the first two races a photo was required to separate the first three home in the handicap hurdle.  Just two necks separated the principals with the Arthur Moore trained Back of Mate beating Might Whitey with Micky Butler in the saddle and Theoystercatcher (Shane Shortall) filling third.  The stewards enquiry was quickly announced regarding possible interference in the closing stages but the placing remained unaltered.

Presswell Lad trained and ridden by Micky Butler supplied compensation for the rider and was the convincing winner of the beginners chase when beating the James Lambe trained Jim Bowie.

Easyontheeye with top amateur rider, Kevin Power was the convincing winner of the hunterchase while father and son duo Willie and Patrick Mullins claimed the bumper with Much Peculiar. 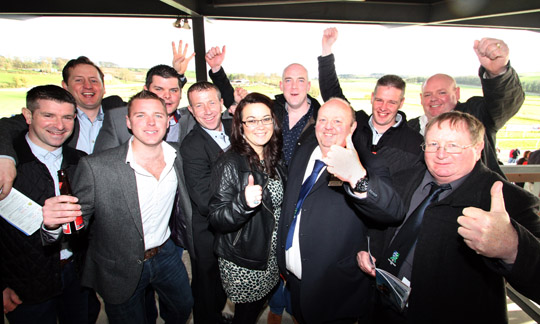 Downpatrick FC management, committee and sponsors in celebratory mood at the Downpatrick Race Meeting waiting for the Ulster National.[/caption]]]>