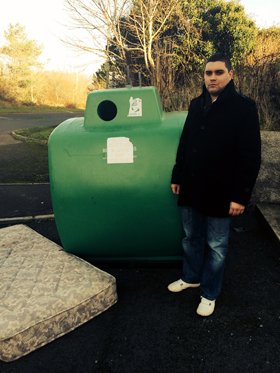 Mr Lewis said: “It is becoming increasingly difficult to persuade local businesses to host recycling banks on their premises as unfortunately fly tippers see a recycling bank as a green light to discard any household item they desire. Many areas were fly tipping has happened have CCTV and I would urge Down District Council to follow up on offenders.
“Clough’s previous recycling point had become vacant and un-kept and this led to the area behind the vacant Highwayman restaurant looking more like a dump than a recycling point. Early this year I met Eurospar management who agreed to have a recycling bank placed on their premises. Local businesses are understandably reluctant when we see fly tipping on a regular bases.
“I  have asked Down District Council to remove the dumped items around this bank and to advise fly tippers to think about their actions. There are a number of waste removal services operated by Down Council and U suggest they make use of them instead of throwing their unwanted items on the side of the road or in someone else’s property.
“They can check out the Council services at the Council website”.
www.downdc.gov.uk
]]>