Downpatrick trainers dominate the Hunt Race sponsored by the Wood Lodge Nursing & Residential Home, Castlewellan, with Brian Hamilton, a former Champion Northern Region Rider, having a pair engaged in Tight Times and Ballybrack Dancer and the latter having the best form of the pair.

However, Strangford trainer Stevie Magee has a trio entered bringing the total runners to five.  News For Pascal stands out after an impressive winning debut at Kirkistown in January and being unlucky to fall three from home when in contention at Armagh last week in a much superior contest.

Current Champion rider,  Newry based Noel Mc Parland, is due to take the mount on the Magee-trained runner and should repay supporters.  Racing is scheduled to get underway at 1.30pm but with 33 horses entered for the third race – a seven race programme is expected.  The hunt has also announced that schooling will be permitted after racing on the day. 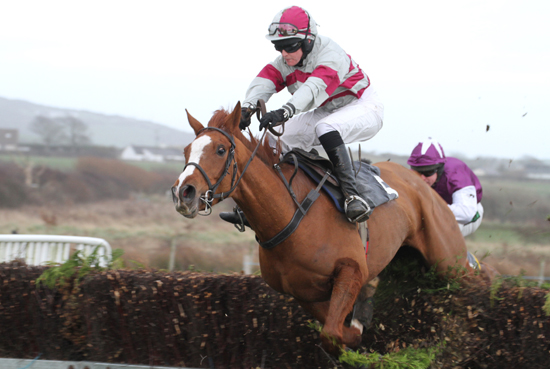 Newry horse South Circle jumps at the last fence but falls to miss a chance to challenge to the final post at the last meeting. [/caption]]]>