<![CDATA[ <p style="text-align: justify;" align="center">ONE of the most popular stage adaptations of a novel makes its debut in Northern Ireland this summer at the Lyric Theatre in Belfast for seven performances only from 23 to 28 July. 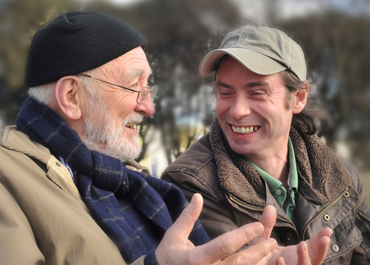 Tuesday with Morrie has received rave reviews and was packed out in Dublin.
(Photo by Margaret Brown).[/caption]

Tuesdays with Morrie is the uplifting, true story of American journalist Mitch Albom’s series of meetings with his terminally ill former college professor, Morrie Schwartz. Sixteen years after graduation, Mitch happens to catch Morrie’s appearance on a television news programme and learns that his old professor is battling Lou Gehrig’s Disease (also known as Motor Neurone disease). Mitch is reunited with Morrie, and what starts as a simple visit turns into a weekly pilgrimage and a last class in the meaning of life.

The autobiographical story by Mitch Albom became a No. 1 International bestseller and saw the author give up journalism to pen a number of hit novels.

Breda Cashe has directed and produced the stage version adapted by Albom and Jeffrey Hatcher, which has toured to packed houses in Dublin and throughout Ireland.

Terry Byrne plays Morrie and Andy Murray is Mitch – together their performances have attracted rave reviews.

Breda Cashe said: “We are delighted to be bringing Tuesdays with Morrie to the Lyric. The play has been packed out throughout our 18-month tour. It touches people and is very uplifting.”

Tuesdays with Morrie runs on the Danske Bank Stage from Tuesday 23 July to Sun 28 July. Tues to Saturday 7.45pm; 2.30pm matinees on weekend. Tickets £18 – £22. Group bookings one ticket free with every 10 purchased.