<![CDATA[ <p style="text-align: justify;">Downpatrick singer and songwriter Travis McVeigh (17), a music student at SERC, is battling for a place to sing in The Voice, the BBC talent singing programme.

“The audition took place at the Holiday Inn In Belfast and it was packed with around a thousand performers.   I was first elected by a vocal judge and had to sing in acapella, that is without instrumental accompaniment, and I got through that ok. In my second session I had a choice of using my guitar or a backing track. I then did two songs. I didn’t sing any of my own songs, not just yet. I thought that would have been too risky. 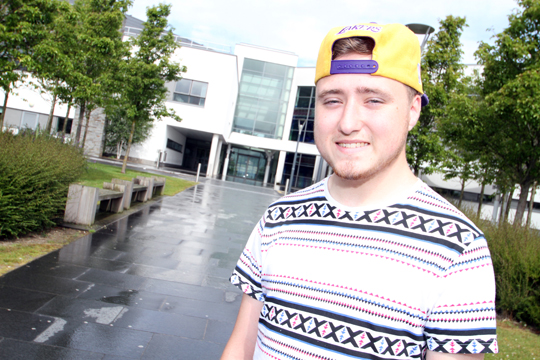 Travis McVeigh from Downpatrick will be auditioning for the second time for a spot to perform live on TV in August in the hit talent show, The Voice.[/caption]

“I did a Calum Scott version of Dancing on My Own and also a more upbeat one. I got through ok and it was a huge relief to have made it at this stage. My next session is another audition in August and if I am successful in that I will make it through to the TV performance. This audition in the first two sessions  only saw  three contestants, myself and two others getting through in my group. I’ve still to sing against loads of other contestants but I’m in with a good chance. It would just be absolutely brilliant to get through. I’ve already picked my song for this performance and I’ll have it off as well as I can do it.”

Travis has written many songs since his early days in music and is a natural and confident performer.

“I just love singing,” he said. “Since I was six I started to learn the guitar and enjoyed singing all sorts of songs. It just became second nature to me.

“I’m confident I can do it. I’ll give it my best shot. It’s the chance of a lifetime really. It was fantastic to sing my new song about the Downe Hospital to the health campaigners at one of their meeting’s last week. They really enjoyed it and gave me a great ovation.”

You can find Travis McVeigh’s song called Stay Open on Downpatrick’s Downe Hospital on You Tube at:

Travis mused: “I don’t think anyone has written a song about a hospital before. It may be a first.

“It just seemed so wrong to me that they should go and build a brand new hospital and then partly remove the A&E. People take sick 24/7 so the A&E and the hospital should be open round the clock.  It’s really too far to go to Belfast or Dundonald to hospital especially out of hours.”

Reflecting on the challenge of The Voice, Travis said: “I think I’ll try a bit of singing tuition to make sure I’m doing it right. I’ve never had singing lessons yet and my guitar playing is probably pretty good, not quite as good as Ed Sheeran’s but he’s a pro. I can play a couple of his songs and I’m a great fan of Ed. I heard he recently visited Downpatrick to buy some acoustic guitars from George Lowden’s, the famous guitar maker, out at the Down Business Centre.”

Travis explained that he has had lots of support from his friends and he organises sessions sometimes. He said: “I don’t do gigs really as I haven’t got the right equipment yet. I need to buy mikes and a speaker and a stand but I’ll get them eventually. I have a Takenami guitar and it has a great sound, but it would be fantastic to play with a Gibson or even a Lowden guitar.

“On the past year or so I’ve done some busking in Belfast for the craic. It has gone well enough and is certainly an experience in itself and I got good responses from passers-by.

“I got involved in quite a number of pantomimes in the Patrician Youth Centre and that helped give me a sense of stage presence. They were great fun and the PYC is second to none when it come to putting on a show. They pull together a great bunch of musicians to bring the shows to life. They also provide music lessons for the members and that was really helpful for me when I was starting off as a kid.

“Maybe if I get through my courses in music I am doing at SERC I can go on and study music at a higher level. My songs touch on things like age crises in life and a wide range of subjects, and my recent song about the Down Hospital seems to have been well received on social media.

“I just hope I go forward in the next audition. The competition is quite fierce. I suppose I just have to believe in myself and go out there and do the song of my life.”

The public across Down District will be rooting for Travis McVeigh in August and urging him on to better things to come.  He has hundreds of supporters in Downpatrick so Team Travis is already cheering!