Speaking after the meeting Ms Ruane said: “Bees play an important role in the natural role from producing honey to pollinating flowers yet over the past few years the numbers have declined. 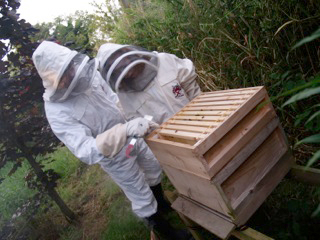 County Down beekeepers at work on their hives in Killinchy.[/caption]

“The meeting with the minister was to discuss the importance of the native Irish Black Honey Bee and how it can be protected. Some of the issues that were discussed today were the importance of councils and other agencies who plant flowers to use pollinated flowers in order to support the bee-keepers and the protection of wild flowers along road verges and in the countryside.

“The beekeepers also pressed the Minister to lobby Europe for recognition of Irish honey through the Protected Geographical Indication.

Ms Ruane added: “I will continue to work with the Co Down bee keepers in order to develop and protect the bees and allow the industry to flourish in the months and years ahead.”

Sinn Féin has an abstentionist policy regarding taking their Westminster seats in the Commons but the corridors of power were also buzzing with talk of bees last week in London. 38 Degrees, (a lobby group), along with members and over 150 MP’s packed a room in Westminster to hear directly from experts about bee-killing pesticides. There was standing room only and a queue out of the door.

Bee-killing pesticides are currently banned, but they could be back on our fields this autumn. Liz Truss, Environment Minister, explained she is deciding whether to let this happen right now. There will be a battle ensuing between  big money lobbyists from pesticide companies on the one hand, pushing her to say yes. But on the othert, together the environmentalist lobby is trying to make sure their voice is heard.

South Down MP Margaret Ritchie also attended the meeting and heard first-hand from experts about why this pesticide ban needs to stay in place.

The lobby group 38 Degrees is doing all it can to make sure Liz Truss and her team keep the ban on bee killing pesticides.

Hundreds of MP’s are now campaigning to keep the ban. Over 380,000 supporters have signed the bee petition.