To judge from the warnings the weather on Saturday was to be “dire”, monsoon like in some other reports and bordering on tsunami quality in others writes Joe Quinn. These were not the predictions of the oft much maligned weather forecasters in their bulletins but for some reason virtually every programme I listened to repeated at great length and with some perverse sense of glee, gloomy tidings about the “rain on Saturday” which would surely have had the Sark brothers Noah and Cutty reaching for their hammers and nails in anticipation of another flood if they had still been in business.  The aim seemed to be to prevent people going about their normal business or enjoying their planned Saturday recreational pursuits with flash floods, unrelenting rain and flooding of property across the country.

I have yet to find out the reason for these cautionary announcements about over watering. 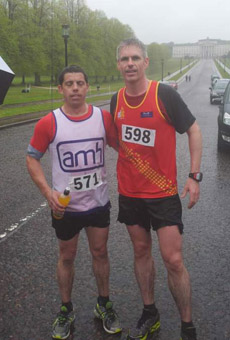 First and second in the Stormont Steeplechase were James Savage and Mark McDonal. [/caption]

We were in the Stormont Estate from early morning, before the precipitation started, preparing for the Action Mental Health Steeplechase and while it rained alright it was nothing of the order predicted and the worst that happened anywhere was that people got wet! Whether the forecasts were instrumental in influencing the numbers or not there was a disappointingly small turnout to what proved to be a highly enjoyable event, this being the first of its kind that I know of, and it was anticipated that the novelty value at least would generate considerable participation. Nor could the previous night’s Les Jones 10K be cited as an excuse for missing Saturday, given that only a handful of locals took part in it.

But whatever the reason only 29 runners went to post for the approximately 9K senior race which was routed round the maze of forest trails in the Estate and incorporated some 34 jumps, which though low and surmountable early on, seemed to grow in stature the further the race went.  Nevertheless Mark McDowell and James Savage set a fast pace at the head of affairs and stayed together until the final 400 metres when James pulled away to record a very respectable 34.44 with mark just 11 seconds further behind.  North Down’s evergreen Terry Eakin  tool 3rd place with clubmate Ali Robinson taking the ladies prize.

East Down were successful again in the Fun Chase over a slightly more than 2 miles circuit, with Chris O’ Connor running a perfectly judged race to overtake the early leaders in the last half mile to power to a well deserved victory. This was his second victory in a week, following his success in the 3 Lakes Fun Run last weekend.

It is planned to stage this event again, possibly on a midweek evening next year, but it will take a considerable hike in numbers to make a hat trick a realistic proposition, as it is primarily a fundraising activity and needs to generate some revenue. AMH wish to thank all who helped with the presentation of the event and especially to all who put 2 fingers up to the weather to prove that skin is waterproof.

Brendan Teer was a clear winner of Friday night’s Les Jones memorial 10K, making a decisive move as the course left the towpath to rise sharply into Barnett’s Park, to burn off the consistent Alan O’Hara of North Belfast and City of Derry’s Richard Johnston.  Brendan’s winning time of 30.15 which would have been a personal best, will unfortunately not stand as due to misdirection in the latter stages the distance covered was some 400 metres short of the 10K mark.  Michael Cultra, Stephen McCartan, Gareth Kelly and Colm McNeill all ran well with Carol Morgan the sole ladies representative and flying the flag well in 53.25

The running fraternity was saddened to learn of the death of Fell Running stalwart Denis Rankin, while participating in Thursday night’s Hill and Dale race on Moughanmore.   He was a tough competitor and always hard to beat and though I didn’t know him well I acknowledge his association with and influence on mountain running. He held near legendary status among his peers and it is perhaps appropriate that his passing should occur in the mountains doing what he loved. East Down AC extend deepest sympathy to his wife, family and friends at his sudden departure.