<![CDATA[ <p style="text-align: justify;">IT was certainly a glorious Twelfth as the sun shone on Dundrum during the 323rd anniversary of the battle of the Boyne celebrations as Orangemen and women arrived in their bus loads.

The main street in Dundrum was packed as the parade began at 12.30pm making its way through the town in the blistering heat. Only a few wore their traditional bowler hat and suit jacket. 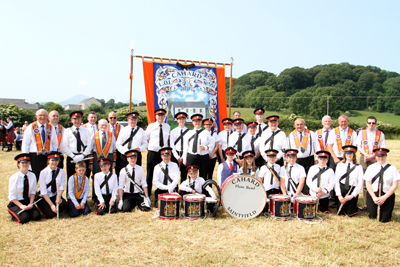 The event was hosted by the members of the Castlewellan District Orange lodge and thousands had arrived to join in the parade or just the watch the marchers from the kerbside.

Speaking in his welcome, Kenny Cromie, Worshipful District Master of Castlewellan District No 12, said: ” Today I have the great honour of inviting two distinguished brethern to the District, County Down Grand Master Bro. Victor Harrison from North Down and Deputy Grand Chaplain Pastor Roy Graham from Country Armagh.

“Dundrum is a very historic village and is famous for the ruins of a once impressive Norman castle which was built by John de Courcy in the 1200’s and can be see clearly from today’s demonstration field.

‘Stretching below the village is Dundrum Bay which was for many years used by the east Downshire Steamship Company as a shipping route to ferry coal and other goods to and from the UK. The bay became widely known when in 1846 the SS Great britain, one of the first iron shops designed by Isambard Kingdom Brunel ran aground during bad weather due to the captain mistaking St John’s lighthouse for the Chicken Rack lighthouse. It took a year to refloat the ship.”  He added that he hoped everyone had enjoyed the colourful, cultural spectacle, getting a “memorable experience”. 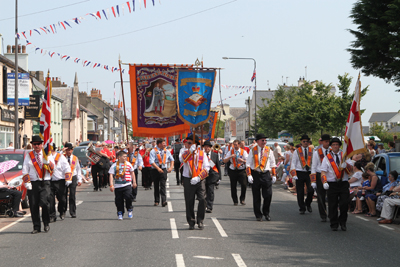 The Saintfield District banner leads their lodges in Dundrum.[/caption]

This year marks the 150th anniversary of Castlewellan District LOL No 12 in its present form although in the 1850’s it had existed as District No 11. By 1870 the  Castlewellan district had a membership of 183 Orangemen rising to 227 by 1888. Back in 1872 brethern form Lecale, Castlewellan and Ballynahinch celebrated a demonstration at Murlough. There are long traditions embedded in the local histrory such as the Castlwellan District holding two Orange services a year each in July and November with the responsibility taken by each lodge in turn.

The Worshipful Brother Victor Harrison also added: “It is a great honour and privilege for me to hold the most serior office within teh County Down Grand Lodge this being the 323rd Anniversary celebration of the Battle of the Boyne hosted by Castlewellan District No 12 and working in conjunction with District Officers of Lecale District No 17.

Check this link to the Facebook Album of Twelfth Photos

“This will be a day to remember when once again we give thanks to almighty God for our forefathers who stood fro civil and religious liberty for all people.” 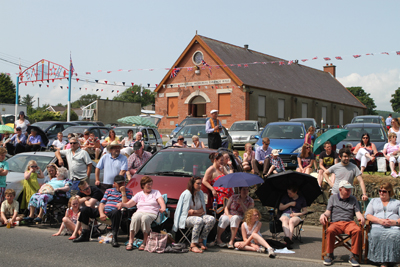 The scene at Dundrum Orange hall as the parade is set to pass by.[/caption]

The message from Pastor Roy Graham was delivered on the Field at the service after the Demonstration march and he said: “The Bible Our Faith and Practice is the theme chosen by the Orange Institution for its services and platform this year. I encourage all who read this message to seriously think about it. Read the Scriptures highlighted and allow God to speak to you and let him have his way with your life.”

FIRST RESOLUTION: – THE FAITH     As members of the Loyal Orange Institution, we give thanks to Almighty God for the Holy Scriptures of the Old and New Testaments, which are able to make men wise unto salvation, through faith in Jesus Christ.

We praise The Lord for the proof of His divine love for man which the Bible contains and especially for what it tells us of His Son, our Saviour, The Lord Jesus Christ.     As we give thanks to God for the free access to Holy Scripture which we enjoy, we resolve to help and support, by our prayers and actions, Christians in other lands who are being persecuted for their faith. We further pray that all people everywhere will read the written Word of God and, under the guidance of the Holy Spirit, come to saving faith in Jesus Christ as their Lord and Saviour. 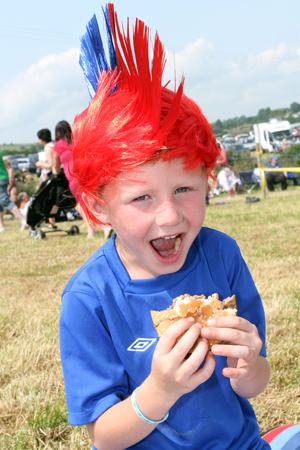 Ethan McVeigh (6) from Derryboye enjoying his beefburger after the Twelfth march ended at the the Field in Dundrum.[/caption]

SECOND RESOLUTION: – LOYALTY     That we, the Orangemen assembled at Dundrum in commemoration of the 323rd anniversary of the Battle of the Boyne do hereby reaffirm our devotion and loyalty to the Throne and Person of Her Most Gracious Majesty Queen Elizabeth II, Queen of the United Kingdom of Great Britain and Northern Ireland and Her other Realms, Defender of The Faith.     We congratulate Her Majesty the Queen on the Diamond Jubilee of her Coronation and reflect on the outstanding example of service and dedication which she has given to our nation and to the nations of the British Commonwealth. We trust that she may long continue to reign over us.

THIRD RESOLUTION: – THE STATE     As proud citizens of the United Kingdom we support the display of the Union Flag on public buildings across the United Kingdom.     We have been dismayed at attempts to undermine the Union and to dilute unionist identity at every opportunity. We look forward to a shared future where the Union Flag will be respected by all and our culture will be respected and celebrated, free from prejudice, hatred and intolerance.

We reflect on the centenary year of the formation of Lord Carson’s Ulster Volunteers, a great many of whom were members of the Orange Institution, and who were determined to defend for themselves and their children their cherished position of equal citizenship in the United Kingdom. We give thanks to God that at a time of crisis, men and women were prepared to take a stand for civil and religious liberty.     We reflect on the many attempts being made to undermine the traditional values of our society. As an Institution we affirm the firm and unwavering Biblical and Christian understanding of marriage as between one man and one woman, seek to uphold it and deplore all efforts to undermine it.