<![CDATA[ <p style="text-align: justify;" align="center">Students from around County Down have got out of the classroom and into the world of work this month with a visit to B/E Aerospace in Kilkeel,  the company which manufactures more than a quarter of the world’s aircraft seating.

Working with Business in the Community’s ’Inspire to Aspire’ programme, B/E Aerospace Kilkeel hosted schools from across Northern Ireland for a ‘show and tell’ careers day.  The company which is part of the global B/E Aerospace network, employs 830 people at its Kilkeel plant, manufacturing seating for virtually every major airline in the world.  The careers on offer reflect the diverse skills needed to create and engineer the company’s products, to support its international customer base and run the massive business. 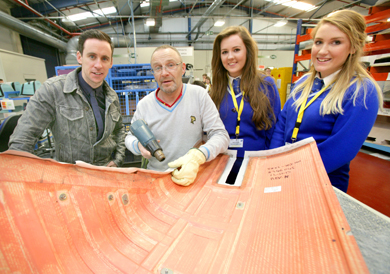 Exuberant radio presenter Connor Phillips from Jonesborough joined the B/E Aerospace team on the day as mc, bringing a touch of extra fun and energy to a packed programme which was planned and managed by student interns currently on one year placements with B/E Aerospace.

Pupils and teachers left classroom life and formality behind them as they toured the busy plant before they were challenged to put their STEM (Science, Technology, Maths and Engineering) talents to the test by designing a viable sleigh to propel a tiny Santa Claus down a test slope!

Rounding off the day, an entertaining and informative session chaired by Connor put employees ‘in the firing line’ for questions posed by students.

B/E Aerospace HR Administrator Natalia Kettle who oversaw the project was impressed with the interest shown by the visiting students.  She said, “The programme which was delivered by our highly capable group of Interns gave schools the chance to see STEM subjects in action in the workplace and the students responded with great enthusiasm.  We enjoyed the visit every bit at much as they did!

“We are a constantly growing company with superb job opportunities at a range of levels and we’d like to think that some of the young people who checked us out at our Inspire To Work Day may at some future stage return to B/E Aerospace as employees.”