<![CDATA[ <p style="text-align: justify;">LAST July, Ballynahinch man Sean Murnin, a well-known publican in the town, was looking forward to enjoying a special day in his life. As captain of Ardglass Golf Club for 2013, he had spent days preparing for his big day as club members flocked out on to the course to vie for the honours of the coveted first prize. 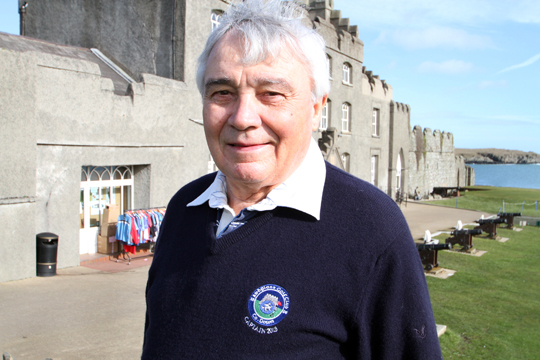 Ready for a few holes of golf: former Ardglass Golf Club captain Sean Murnin who suffered a stroke during his captain’s day celebration at the club last July speaks of his experience of falling suddenly ill.[/caption]

I spoke to Sean in the clubroom, and was delighted to hear he was enjoying a new lease of life following his illness. “I have never felt so well in a long time,” said Sean. Even despite the long damp and cold winter, I have become much stronger and fitter and I enjoy a couple of short rounds of golf a week. I don’t do the full 18 holes, and I do take a buggy to get me around. But I love the craic with my fourball, the fresh air and the relaxation. Adglass is such a beautiful course you just have to feel good playing there.

“But last July was a different story. I had already been going through a battle with cancer and was doing all right. As I entered into the week of the Captain’s Day at the start of July, I had a really busy time in front of me. Firstly I had the all-Ireland juvenile golf final  to attend which was hosted in Ardglass at the start of the week, then all the general preparation to keep an eye on for the Captain’s Day. And of course there was usual Captain’s dinner mid-week. It was a hectic time.

“So on the morning of the Captain’s day itself, I rose very early and was at the club by 5.30am. Along with the green staff, I  went out on to the course and changed the flag positions, we raised the club flag on the flagpole, and then I saw off the first early bird golfers at 6.15am.

“Once the golfers were flowing onto the first tee box, myself and the staff went for the traditional breakfast. Following that, head greenkeeper John Moore and myself had a buzz around the course on a buggy to check the course was playing well and we returned to the clubhouse.”

Up to that point Sean explained he had been feeling quite fit and active even after an already busy week. But around lunch-time when he and his friends were watching the rugby test on TV while he was having a coffee, he began to notice some stange sensations through his left side.

At that point, there was a photo call outside with Down News at the front of the clubhouse and he rose up and made his way downstairs. But the effects of the stroke were already kicking in. As he was getting his photo taken outside, Sean said: “I really can remember little of what happened after I started to go downstairs. My left leg felt numb and uncomforable and my left arm too was beginning to get numb and I could not move it properly. But I got through the photo shoot ok. I felt very strange. I just could not fathom out what was happening to me.”

As Sean tried to go upstairs again, his symptoms worsened quickly and he said: “I really did not know what was going on. I did not think it was a stroke at all at that time. There was no great pain as such. My grandson rushed me off to the Downe A&E to get me checked out and they admitted me right away. I received an injection, and before I knew it I was in a ward and was there until the following Thursday. The medical treatment I received was second to none. The staff were brilliant. This early intervention was critically important for me.

“I shudder to think what  would have happened if this had happened when the Downe A&E was closed at weekends on in the evening when doctor cover is not there. I just may have ended up in the Ulster Hospital or Rotal Victoria Hospital emergency departments. The wait for treatment could have been catastrophic. It is impoprtant to get treated as soon as possible in a stroke to ensure the condition is stabilised and you have a good chance of recovery.”

Sean says he never had any warning signs before the stroke that he was unwell.  It was a sudden attack which he described as “alarming”, and as he made the short journey to the Downe Hospital he said he felt his condition getting dangerously worse. “If I had to be driven on to the Belfast Hospitals I could have ended up in a wheelchair… or worse.  I am so glad that the Down A&E was there to help me in that very difficult time.

“I am very lucky that I have made an excellent recovery and I certainly look after my health now as best I can. I have many good friends and a great family and they have all been very supportive through this difficult time. I would like to give Canon Rogan a very special thank you as he was a great comfort and very kind and visited me every day while I was in hospital.”

“Now I am just tryin to enjoy life as it comes and play a few relaxed holes of golf a couple of times of week,” added Sean. “I have a lot to be thankful for to staff at the Downe Hospital A&E.”

Would you know how to recognize the signs when someone was having a stroke??

Northern Ireland Chest Heart and Stroke desribes a stroke as “a ‘brain attack’, caused by a disturbance in the blood supply to the brain. It is a medical emergency that requires immediate medical attention. So recognising the signs of stroke and calling 999 can be crucial to someone’s chances of recovery.” For a full descriptipon and details of the FAST campaign on str0ke, check out their website link at: http://www.nichs.org.uk/315/fast-campaign ©  Jim Masson 2014.        ]]>