<![CDATA[ <p style="text-align: justify;">‘A rarely performed masterpiece’ is how critics have described Brian Friel’s poetic play, Molly Sweeney, which comes to the The Great Hall, Downshire Estate, Downpatrick, for one night only on Saturday 15 March at 8pm. 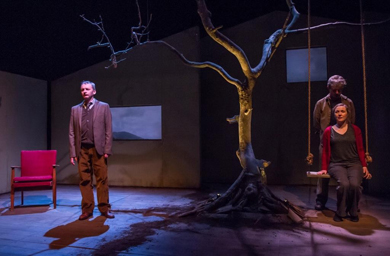 Molly Sweeney, one of Irish playwright Brian Friel’s masterpieces, is to be performed in Downpatrick.[/caption]

County Tyrone actress Dorothy Duffy, best known for her role in the heart-wrenching film The Magdalene Sisters, stars alongside former Downton Abbey actor Ruairi Conaghan from Magherafelt and Frankie McCafferty (who appears in the Bafta Award-winning film Philomena) who is originally from Donegal.

This poetic tale revolves around Molly Sweeny, a woman who is blind since infancy and is persuaded to have an operation to restore her sight. Her husband Frank is convinced she has nothing to lose; her ophthalmologist Mr Rice is not so sure.  Actor Dorothy Duffy who plays the role of Molly in the production and now lives in London, said of Molly,

“She is an amazing character. The fact that she is blind is to her, a very insignificant detail in her life. She has great friends, a great job, she swims, walks and is really independent. She meets Frank in her mid-30s and they have a whirlwind romance, then this subject comes up about an operation to restore her sight.”

Through a journey of memory, hope and despair, Molly Sweeney begs us not only to see, but also to understand other people’s points of view.

Down Arts Centre are pleased to be hosting The Pop Up Arts Clinic, a new initiative by Voluntary Arts Ireland, on Tuesday 18 March.    Do you take part in arts activities, help run a local festival or belong to an arts or craft group? Perhaps you want to start something new?

During a one-to-one session over coffee, Emma Whitehead, Voluntary Arts Ireland’s Support Officer will take you through the nuts and bolts of running an activity, event or group.  This free Clinic will be running in one-hour slots all day.  Contact Down Arts Centre to book your place.