<![CDATA[ <p style="text-align: justify;">ST PATRICK’S Primary School at Burrenreagh near Castlewellan has been thrown a life-line by the Council Catholic Maintained Schools body following a consultation period. The school had been earmarked for closure, but last week they received the good news that the school is now safe. 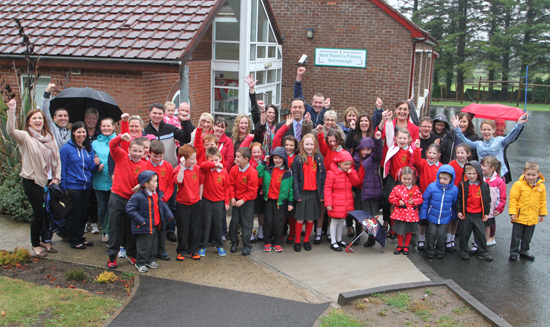 St Patrick’s Primary School celebrate on hearing the news the CCMS had removed the threat of closure.[/caption]

However, St Patrick’s Primary School in Burrenreagh was in fact the only primary school in the area to be marked for closure.

School Principal James Hunt spoke to Down News shortly after the school received work from the CCMS and said: “A lot of people believed in our school and everything that our school stands for.

“It is a tribute to the parents, the the staff and the community particularly have been strong and steadfast. Many people join dwith us in support in our campaign including local politicians and the press.”

Siobhan Rice, Chair of the School PTA said: “We are all delight dat the news. The campaign we ran was effective. We sent letters, spoke to politicians, sent letters to the Education MInister and held meetings in the school with the public and parents.

“For eight months we have been totally engaged with this process and it has paid off. We’d like to thank everyone who has help us through this time.

“We run successful breakfast and after school clubs and a lot of parents really appreciate this. We are making our local contribution in helping young parents continue in work otherwise many would simply have to stay at home.”

South Down MLA Seán Rogers (SDLP) has spoken out at the recent announcement by the CCMS and said, “I was delighted to hear that the consultation process into the threatened closure of St Patrick’s Primary, Burrenregah has now been suspended until further notice.

“St Patrick’s Primary School, it’s principal, Board of Governors, staff, Parents and Pupils put a tremendous effort into their campaign to save the school and I am delighted that it has received a reprieve.

“Back in May, I took a delegation of pupils, parents and teachers to Parliament Buildings at Stormont where we heard first-hand, as did other members of Stormont’s Education Committee, the top class teaching facility that St Patrick’s is as well as the extracurricular activities and services that the school offers. We were also entertained by the pupils and their version of One Directions ‘Burrenreagh is Beautiful’.

“I want to praise all involved and to pay a special tribute to the local community that rallied round and never accepted the possibility of closure. For this reason interest in the school increased and enrolment is up.”

Newcastle area Councillor Eamonn ONeil (SDLP) added: “As a member of the Board of Governors and a long term friend of the school, I am delighted to hear of the news, which makes good sound sense. St Patrick’s, Burrenreagh has a superb teaching environment which forms the backbone of the Bryansford/ Burrenbridge area.

“It is a very homely school which achieves great academic results as well as offering top class extra-curricular activities and a very successful breakfast and after-school club.

Praise must be given to all for a valiant campaign which has had the outcome we longed to hear. I was part of the delegation that went to Stormont in May along with Seán Rogers MLA and Margaret Ritchie MP when I experienced the want and the desire for this school to remain open. Fortunately the prayers of the local community have been answered. I hope that St Patrick’s, Burrenreagh is around for a long a time to come.”

Alliance Councillor Patrick Clarke has also welcomed the recent decision by the Council for Catholic Maintained Schools (CCMS) to suspend the consultation process and mechanism regarding St. Patrick’s, Primary School at Burrenreagh. He paid tribute to the local school and its supporters.

Alliance Councillor Patrick Clarke said: “I am very pleased to learn that the Council for Catholic Maintained Schools (CCMS) has agreed to suspend the consultation process.

“Back in March I had written to both the CCMS and the Minister for Education urging for the retention of St. Patrick’s Primary School at Burrenreagh which has been an important and integral part of the local community for decades.

“I firmly believe the decision by the Council for Catholic Maintained Schools (CCMS) to work with the community and stakeholders in the Burrenreagh area, Castlewellan, to retain St Patrick’s Primary School is the right one.

“With increased enrolment I hope that there will be a long term future for the maintaining of St. Patrick’s Primary School.”

The decision to keep open one small rural school outside Newcastle has set down a vital marker for the survival of Clontifleece PS near Newry.

He added: “The Minister and his fellow Sinn Fein party members can’t have it both ways. The facts are clear. He had to buckle in the face of a rational argument for the retention of a school that in many ways is a mirror image of Clontifleece.

“So why is he prepared to implement a policy of educational provision discrimination between two rural schools in South Down?

“For a man who is used to his way being the only non-negotiable way the decision he was forced into making in relation to Burrenreagh represents an embarrassing defeat.

“Sinn Fein across the board in Newry and Mourne have been an utter disgrace in the spineless way they have been frightened to challenge their own Minister.

“Instead of trying to make a case for the keeping open of Clontifleece they have taken the coward’s way out by following the party line. There is more sincerity in a bucket of slippery eels than Sinn Fein on this issue.

“The fact is that the education authorities, across the board, have adopted a bullying approach to the supporters of Clontifleece PS, its pupils and staff.

“It makes a mockery of claims that the Education Minister is prepared to listen to commonsense when the argument is put forward on behalf of Clontifleece.

“Instead Mr. O’Dowd would appear to be using every trick in the Department of Education book of misinformation and double standards to try and axe Clontifleece.”

“The closure of such an important element of the community, one that has been able to make a remarkable contribution to our society over decades, would be a total disaster.”

Sinn Féin councillor Michael Ruane has reacted to the news that Clontifleece PS is set to close by expressing his regret that the school was no longer deemed to be sustainable.

Councillor Ruane, a past pupil of the school said: “It is unfortunate that it is no longer viable to keep Clontifleece primary school open and that the Minister has had to approve the closure proposal put forward by the CCMS.

“Clontifleece Primary School provided a superb education to children from the local community for generations. Next year will actually be the 175th Anniversary of the opening of Clontifleece primary school, and in all that time it has served the local community and children extremely well and with a great professionalism. I want to commend the Friends of Clontifleece group who have shown a great enthusiasm, drive and community spirit in striving to save the school from closure and I share their disappointment upon hearing this news.

“I welcome the decision made by Minister O’Dowd to extend the closure date a further year than was original proposed by CCMS to ease the concerns of the local community regarding the closeness of the new school year and I also hope this allows for a smooth transition for pupils and staff alike.”