Among the items on the agenda were financial support for local fishermen in South Down, felling of hundreds of acres of infected woodland at Castlewellan Forest Park, launch of the Mourne, Cooley Gullion Geotourism Initiative, recent problems with Down District bin collections, the introduction of free public Wi-Fi to Down District towns of  Newcastle and Downpatrick Leisure centre updates, CAP reform negotiations and tourism signs in the Mournes.

Chairperson Michael Healy welcomed that Down District’s three major towns Ballynahinch, Downpatrick and Newcastle town centres now all provide free Wi-Fi open to laptops, smart phones or any other internet-enabled devices in the area, offering a 24/7 featured free connection for everyone and hi-lighted that the free public Wi-Fi zones will help add a boost to shoppers, visitors and town centre businesses.

South Down Alliance members also thanked Councillor Patrick Clarke for seeking free public Wi-Fi for Castlewellan which Down District Council is investigating and has submitted a grant application to Down Rural Area Partnership. 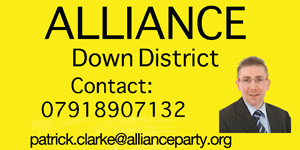 Officer Brian Eggins welcomed the decision by the Regional Development Minister Danny Kennedy to amend and remove the ‘unsuitable for coaches’ phrase on the Mourne Coastal Route signs recently installed back in April in Newcastle, Kilkeel, Annalong and Rostrever.  South Down Alliance members also agreed that the current signage warnings to coach drivers saying not to drive coaches through the Mournes had been a bad decision that could have badly affected tourism and the local economy in the Mournes if the signs were not to be altered to welcome coach tours to the Mournes.  Bian Eiggins finally welcomed the launch of the Mourne, Cooley Gullion Geotourism Initiative.

Officer David Griffin voiced his concerns on the need for the Agriculture Minister to fully support local fishermen through the delivery of a financial aid package for fishermen as soon as possible who have been badly affected in South Down by the bad weather which resulted in days lost at sea, as well as quotas, fuel cost increases and other restrictions. David Griffin further added that the Northern Ireland Executive has accepted that bad weather and the resulting losses were grounds for the introduction of a financial assistance packages for the farming industry so the Agriculture Minister should make the same provision to the Executive in support local fishing industry

Councillor Patrick Clarke in his report to South Down Alliance members reported on ongoing problems over recent months encountered with the wheelie bin collections in certain areas of Down District due to both operational difficulties and mechanical break downs in the aging Council fleet of refuse collection lorries.

Councillor Clarke said: “Despite recent problems the refuse and cleansing staff of Down District were to be highly commended for their work ethos under difficult circumstances.” He also gave an update on the current situation regarding the current Newcastle centre and the proposed new leisure centre for Newcastle and the new Down Leisure Centre in Downpatrick.  The forthcoming Festival of Flight and Red Arrows visit to Newcastle in August was discussed which Councillor Clarke believes will be another major tourism and financial boost to the seaside town of Newcastle and District.  Councillor Patrick Clarke finally discussed his concern about the felling of up 250 of acres of infected woodland at Castlewellan Forest Park, CAP reform negotiations, and his recent meetings with Roads Service, NI Water, National Trust and Housing Executive.