<![CDATA[ <p style="text-align: justify;">AUGUST Bank Holiday Sunday is the last chance to solve the Mediaeval Mystery at the heart of four of Downpatrick’s tourist attractions.

Designed to accommodate  explorers of all ages, the intrepid Indiana Jones adventurers  embark on an exciting trip that begins at Down County Museum, continues at the St Patrick Centre, and the concludes at Inch Abbey via the steam train at the Downpatrick and County Down Railway station, back in time to the late twelfth century Inch Abbey. 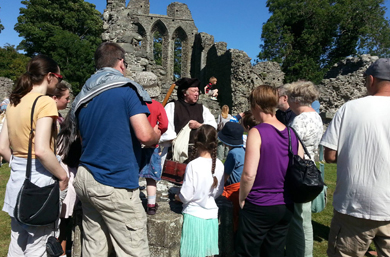 Inch Abbey will be an interesting place to visit during the August Bank Holiday as the Mystery Monk makes his last visit.[/caption]

Downpatrick and County Down Railway chairman John Wilson said: “Visitors will be guided by archaeologists,  an be set some intriguing challenges including taking part in a dig, the discovery of medieval artefacts, and unravelling the mystery surrounding them at their final destination.

“This involves, unlocking the guided treasure trail at Down County Museum, unearth artefacts at the Saint Patrick Centre with real archaeologists, travelling back in time to Inch Abbey on our genuine ‘Time Train’ express with the Downpatrick and Co Down Railway to finally solve the Medieval Mystery with the Monks of Inch Abbey.”

Once finished, refreshing warm teas and coffees, as well as lots of buns are being served all day onboard a buffet carriage parked at Inch Abbey station waiting for the return journey. Also, the Downpatrick Railway will also be open for trips out to Inch on Saturday and additionally on Bank Holiday Monday, although without the Monk.

Mr. Wilson added: “A trip to the railway isn’t just  about the station museum and the new “Carriage Gallery” visitor centre – it  brings the golden age of the railway vividly to life and looks at the impact that the railways had on people’s live  through artefacts from the smallest such as a ticket in the upstairs exhibition, or the largest such as lovingly restored railway carriages in the Carriage Gallery and the stark contrast of the wrecks these vehicles once were when rescued.

“For the younger train fans, children can enjoy their own ‘Kids’ Station’ in the Gallery, and dress up as a train driver or guard, or they can get to drive Thomas the Tank Engine on a model railway – or will they let the ‘big kids’ have a go too?”

For those a little more adventurous, and perhaps live out a childhood dream, you can buy a “Footplate Pass” for just £20 and get to travel up in the locomotive cab with the driver.

Trains on Saturday and Monday run 2pm till 5pm, with ticket costing: adults £5.50 return, £4.50 children and senior citizens, and don’t forget that children aged three years old or below go free. A family ticket costs £18, and  why not join the DCDR Society and get free travel for the entire summer months, as well as get regular updates on what’s happening at Northern Ireland’s steam centre?