<![CDATA[ <p style="text-align: justify;">People from Ballynahinch, Drumaness and the surrounding areas have come together spontaneously to collect donations for refugees across Europe.

Local schools, churches and individuals have donated much-needed items such as clothing, blankets, first aid supplies and tents for the Irish Refugee Solidarity campaign. Shipments will be taken to refugees in Calais and then beyond to those in Hungary and Greece. 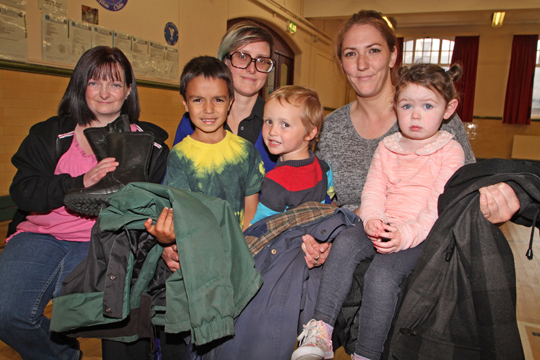 Sheree McAleenan, Anna Morvern and Andrea Walsh pictured in the Dan Rice Hall in Drumaness helped coordinate the refugee appeal in their Ballynahinch and Drumaness area.[/caption]

Christ The King Primary School in Drumaness held a fundraising event to gather funds for fuel and transportation, whilst Drumlins IPS in Ballynahinch is also holding a non-uniform day on Friday to raise further funds. Other local schools have also  collected a large number of donations.

Andrea Walsh and Sheree McAleenan are two local women who have been helping to organize local donations, storage and packaging.

“The generosity of local people has been amazing”, Andrea said. “People have seen the terrible images of refugees stranded across Europe on the news and want to do something to help.

“An amazing 150 boxes of donations of shoes, jumpers, coats etc  have already been packed by volunteers in the local area. Amongst the donations have been brand new sleeping bags and woolly hats and scarves.

Cheree McAleenan said: “The Catholic Girl Guides have even donated large Icelandic tents of the type they no longer use as temporary shelter for the refugees. Large tents are one of the items most needed.

Drumaness-based mum-of-two, Anna Morvern, a human rights and refugee lawyer, coordinated the local effort and said she was delighted with the way in which her local community had engaged in showing solidarity with the refugees.

She said: “Initially I had just posted a message on my local buy-and-sell board saying that I would be happy to forward donations if anyone local wanted to contribute. I was inundated with generous responses and so formed this local group to better organize our efforts. We have had a lot of support from the Leisure Centres in Ballynahinch and Drumaness and from local councillor, Mark Murnin.”

Drop-off centres have now closed for donations and women’s and children’s items will be given to the some 600 refugee families already in Belfast, via the Northern Ireland refugee support organisation, NICRAS.