<![CDATA[ <p style="text-align: justify;">SMARTBUNKER™ from Castlewellan has donated one of their award-winning products to the Breast Cancer Charity Pretty ‘n Pink for a special draw at the Balmoral Agricultural Show running from Wednesday to Saturday 14-17 May and the draw will take place on Friday 16 May at the show. 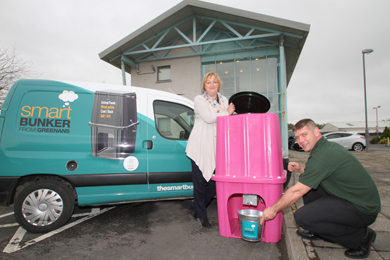 Niall Greenan, innovator of Smartbunker, with Janice Symington, Down Business Centre manager, look over the one-off shocking pink bunker make specially for the Pretty ‘n Pink fundraising draw to be held at the Balmoral show which runs from 14-17 May.[/caption]

Niall Greenan, the innovator of this increasingly popular multi-purpose, secure, bunker dispenser that can be used for a wide range of products such as animal feed. coal, wood pellets, salt, grit, or similar dry products, said: “I am just delighted to be running this draw for Pretty ‘n Pink. They are a marvellous cancer charity and deserve all the support they can get. The fight against cancer must go on and we all have a role to play in it whether it is in fundraising, raising awareness and education, or in the more technical areas of support to families and sufferers or in research.

“Smartbunker is supporting the only registered charity working specifically with breast cancer. All the funds raised will go to help women with breast cancer and to their families. We are asking people at the Balmoral Show to come along to our stand and buy a ticket for £1 or a book of ten and support this worthy cause.

“Also, we will be running in parallel another fun way to enter the competition… for free. During the Giro d’Italie cycle race days opening and Stages 1 and 2 on Belfast from Wednesday-Sunday 8-11 May, a pink smartbunker will be tied to the top of my company van and all you have to do is take a photo of it where ever you spot it following the race – most phone cameras are fantastic these days so I’m sure there will be plenty for happy snappers out there clicking away.  All you have to do is send your photo to:

or message Pretty ‘n Pink with the date, time and location and you will automatically be entered into the draw. 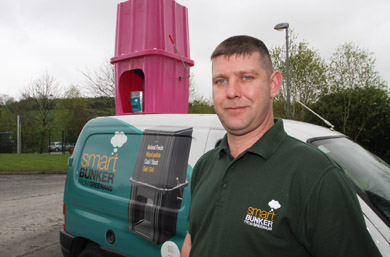 Spot and photo the Smartbunker on the van: Niall Greenan from Castlewellan who invented the Smartbunker has donated one for a special draw for Breast Cancer Charity Pretty ‘n Pink.[/caption]

“I have made a special smartbunker for the occasion,” explained Niall. “The one to be raffled off is in a shocking pink colour. Most of the smartbunkers I sell are a brown, black or green colour but this one is unashamedly pink, just for the occasion to support Pretty in Pink. These bunkers are very useful for these especially who work with animal feedstuffs as they fill the bucket for the bottom of the storage unit which ensures that the feedstuff  is rotated properly. But it is equally just as useful for dispensing coal for the elderly.

“Following my recent appearance on the Irish version of Dragon’s Den, interest in the smartbunker has even increased further. It is a useful product.”

Noleen  Adair, founder of Pretty ‘n Pink, said: “We really appreciate what Niall is doing for us in Pretty ‘n Pink. Breast cancer is a major cause of death in women of all ages in Northern Ireland and we provide valuable support to them and for their families. We wish Niall every success in his fund-rasing endeavour during the agricultural show.”

Janice Symington, Down Business centre manager said: “We are delighted that Smartbunker is doing so well and has donated a bunker for a draw at the agricultural show to this very deserving charity. Niall was one of our clients who came to us who we mentored in a business start-up support programme some time ago and with our help and signposting to Invest NI and other bodies he has grown from strength to strength. I hope he has a successful run in selling tickets fro Pretty ‘n Pink and in selling his smartbunkers at the show.”

Check the Smartbunker website for further details (phone +28 43770845) or email us or go to the Pretty ‘n Pink Website for details and information about the draw.