<![CDATA[ <p style="text-align: justify;">The annual Newcastle Summer Season programme gets off to a dramatic start this weekend with the Belvoir Player’s production, The Auction in Killybuck which will take place at the Newcastle Centre at 8pm on Friday 4 and Saturday 5 July. 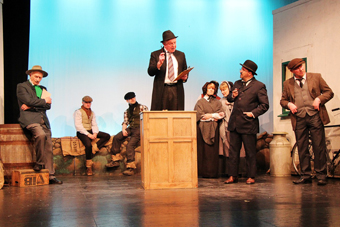 The Auction in Killybuck… performed brilliantly by the Belvoir Players.[/caption]

The Auction in Killybuck, by Louis J Walsh, is set in 1914 in North Antrim where Aunt Rebecca has a farm of land to sell. Her nephew, Robert John, would like to buy the farm but since he refuses to marry the girl his aunt has chosen for him, preferring instead his own choice of sweetheart, she refuses to lend him the money required to make the purchase.

The local auctioneer, aided and abetted by a few locals, sets about thwarting the old girl’s wishes and by some very devious means, conspires to get the farm for Robert John.

The play is full of the rich humour of the time and has become part of Ulster Theatre folklore. A keen social history, the play portrays us as we were a century ago, and some might even suggest that nothing much has changed! Prepare to be moved, amused, entertained and even learn a little by watching this charming piece of Ulster theatre.

The Summer Nights programme will offer a variety of live theatre and music events every Friday and Saturday night in the Newcastle Centre on Central Promenade. 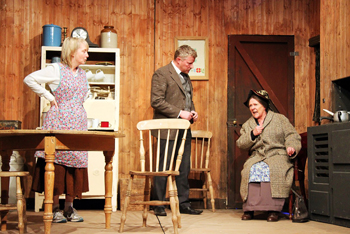 A classic Ulster comedy to play in the Newcastle Centre.[/caption]

Other theatre highlights include Man in the Moon, fresh from a sell out run at the Waterfront Hall, on Saturday 26 July. The Bart Players bring to life Wedding of the Year on Friday 2 and Saturday 3 August. The Donard Players and Glee Singers revive the production of Percy French – The Last Troubadour on Friday 8 August. To round off the theatre programme, The Southbank Playhouse present an evening of drama, wit and blackmail in Oscar Wilde’s An Ideal Husband on 15 & 16 August. If you enjoy comedy, join Tony Sutcliffe for the world premiere of his hilarious new show based on his experiences of more than 20 years as a first aid trainer. On Friday 18 July Funny Bones – ‘An imbecile’s Guide to First Aid’, will invite you into a world of medical mayhem and mirth, with Tony trying to impart his vast but somewhat suspect knowledge of subjects ranging from CPR to childbirth.

Music highlights include An Evening with Ella on Saturday 12 July; Fiona Scott Trotter captivates audiences with her charismatic stage presence and sassy scat singing. Tribute bands include season favourites, The Illegals featuring Niamh Kavanagh on Saturday 19 July, Celtic Soul: A Tribute to Van the Man on Friday 25 July and The Bjorn Identity Abba tribute on Friday 22 August. Then to finish the season with bang, hit the dance floor with Balkan Alien Sound on Saturday 23 August.

To purchase tickets for The Auction in Killybuck (£9 / £7 concession) and for further information on any Down Arts Centre events, please contact: www.downartscentre.com