<![CDATA[ <p style="text-align: justify;">Sinn Féin’s Westminster candidate for South Down has launched his election campaign at a packed event in the Burrendale Hotel in Newcastle.

South Down assemblyman Chris Hazzard MLA has declared that Sinn Féin is the only party that can make a difference for the constituency. 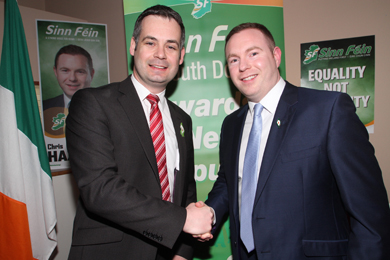 TD wishes Chris Hazzard all the best for the forthcoming Westminster election.[/caption]

Referring to the work that has been carried out by both Mick Murphy and Caitriona Ruane before him as candidates for Sinn Féin in South Down, he focussed on the success of Sinn Féin and said: “With three Senators, four MEP’s, five MP’s, 14 TD’s, 29 MLA’s, 264 councillors, 10 thousand active members and half a million votes across this island…  Sinn Féin is the largest political movement in Ireland.

“South Down badly needs to tap into this new momentum… we need to set our economy and our community on a new direction. We need to build inclusive partnerships for change. 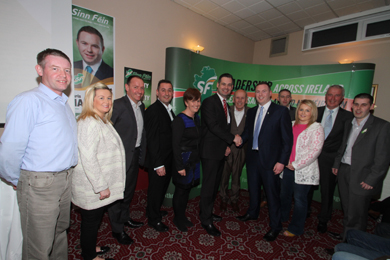 “When we said we would decentralise public jobs, we meant it – and next month will see the relocation of DARD Fisheries office out of Belfast and into Downpatrick.

“When we said Down needed a new hospital – the former Sinn Féin Health Minister Bairbre de Bruin built it – and today we continue to lead the fight to keep vital services in the Downe and Daisy Hill Hospitals.

“When we promised to invest in new school builds for our local area – we have followed that up with nearly £100million invested in new school projects in the last few years.

“When our local farmers and fishermen were severely hit with harsh weather in recent years Sinn Féin ensured that hardship payments were delivered and industry taskforcees created to deal with local concerns.

“And when the SDLP-controlled Down Council only managed a meagre 15 new jobs as a result of foreign direct investment in the last 5 years, the Sinn Féin controlled Newry & Mourne Council promoted nearly 1500 new jobs.”

Outlining why voters should now consider an alternative, Mr Hazzard said: “When others say we can’t effect change because we don’t take our seats at Westminster – let us challenge this lazy and entirely illogical point.

“The SDLP have held this seat for as long as I have been alive – and yet you genuinely wouldn’t need every finger on one hand to count any accomplishments garnered from sitting on Westminster’s green benches.

“They know it themselves…  its why Margaret Ritchie’s attendance and voting record is one of the lowest of any MP.

“I intend to convene and chair a specific investment taskforce which will invite all MLA’s, community and business leaders, tourism promoters and Council officials to participate. For its only when we work together that we can truly deliver for the all the people of South Down.”

Chris Hazzard was joined on the platform by Pearse Doherty, a TD from Donegal, and his NI Assembly colleague, Catríona Ruane MLA.