<![CDATA[ <p style="text-align: left;" align="center">A £2.6 million improvement scheme to the Downpatrick sewage system  is about to begin later this week.

He said: “The Hunters Mill Water Storage Tank scheme, which represents an investment of just over £1 million by NI Water is to be welcomed. It will generally improve the quality of local water flow and importantly will reduce the risk of out of sewer flooding in the area which has been a persistent problem for a number of years now. “Recently my colleagues and I have had a number of meetings with both NI Water and the scheme contractors to urge that the work is carried out promptly and in a way that will have little impact on local people, business and traffic flow in the town. “I am delighted that this scheme is finally getting under way. The project will see not only the construction of a new storm water storage tank in the existing open ground near Thomas Russell Park, but the laying of new sewers in the open ground between Hunters Mill and Thomas Russell Park, the provision of a new screened overflow and general sewer upgrades in Stream Street area of town. “The sewer upgrade work in Stream Street will require traffic controls with lane restrictions needed to allow the works to be completed in a safe environment, so we urge local people to be patient over the coming weeks as delays are inevitable. During construction a temporary construction road will be in place from the Ballydugan Road via the playing fields in order to minimise the impact to the residents of Thomas Russell Park. “The aim is to minimise vehicular and pedestrian traffic disruption as much as possible, and this is a must to ensure that our business community to do suffer in the run up to their busiest time of the year, Christmas,” added Councilor Mac Con Midhe. And Downpatrick Sinn Féin election candidate Naomi Bailie said water infrastructure in Downpatrick is in need of major investment and both the Hunter Mill and Market Street projects were the first steps in the process towards bringing the towns capacity up to standard. She added: “It is important that local people recognise the significance of these planned works. They are the first steps towards the modernisation of Downpatricks sewerage infrastructure. Whilst disruption is likely we would ask that local people be appreciative of the need for this work to be completed and mindful of the consequences it will have for the wider Downpatrick area. [caption id="attachment_43760" align="aligncenter" width="540"] 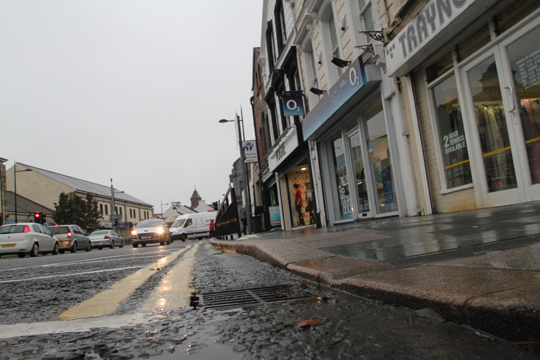 Downpatrick will see the commencement of a major sewerage improvement scheme this week.[/caption] “The second phase of the Market Street Pumping Station scheme is now due to begin and represents an investment of approximately £1.6 million at the site. The scheme includes the Construction of a new pumping station/storm retention tank in an area of the car park behind the Grove Shopping Centre as well as the laying of a new foul pumping main from the new pumping station to Russell’s Park Pumping Station (located in Dunleath Park); the laying of a new storm pumping main to the river Quoile (via the car park access road, through the Down Historical Railway grounds and across the fields to the river); final sewer upgrades and connections in Market Street to route flows to the new pumping station and the demolition of the existing Market Street pumping station. “The second phase Market Street Pumping Station scheme requires the installation of deep sewers within Market Street, Ballydugan Road and the car park access roads in central Downpatrick, but this work cannot take place until the station is fully operational. “Detailed traffic management arrangements for the construction of these sewers have been discussed with DRD Roads Service to try and minimise their impact. For most of this work it will be possible to maintain two-way traffic flows with critical connections carried out with weekend/night-time working. “The bulk of the sewer upgrade work is planned for July/August 2014 to tie in with the school holiday periods when traffic levels are lower. Some advance pipelaying work near Rathkeltair House will be carried out in Spring 2014 and two way traffic flow will continue throughout this work section. “Access to the car parks will be maintained with some lane restrictions and diversions in place at times. It is anticipated that both schemes will be complete by March 2015.”]]>