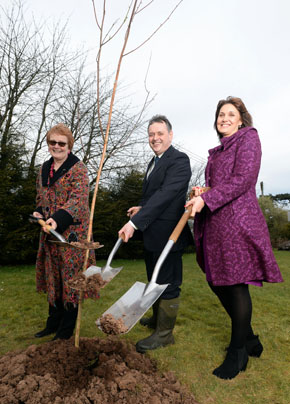 Held at SERCs Holywood campus, the event was attended by SERC staff, MBE recipients Alice McDaniel, Irene Megaw and William Greer and and their respective family members, friends and colleagues.

Participants congregated at at SERCs Holywood campus for refreshments and speeches, the latter of which began when SERC Principal and Chief Executive Ken Webb thanked attendees for attending the ceremony and congratulated the MBE recipients.

Commenting at the ceremony, Ken Webb SERC Principal and Chief Executive said: “SERC has received more MBE’s than the six regional colleges put together which is testament to the high quality teaching and learning we provide. All of us at SERC are incredibly proud to see Irene, William and Alice honoured with an MBE.

“They have given so much of their time to supporting and encouraging both the young people at this College and the local communities, and I am delighted that the dedication and commitment to all of them has been recognised in such a high-profile way. The planting of the three trees will provide a lasting reminder within the College of their achievements.”

Alice McDaniel, who has since retired from SERC said: “I was delighted to be invited to the tree planting ceremony. It is lovely to be recognised in this lasting way and I look forward to visiting ‘my’ Lime tree when it is in full bloom!”

On receiving the news, recipient Irene Megaw spoke of her pride at being honoured. She said: “It was a complete surprise and delight.  It is incredibly rewarding meeting people of all ages who go on to full time employment. I would not have been able to achieve it without the help of my friends, family and colleagues and I take comfort in knowing that this is a recognition of everybody’s achievements.”

William Greer paid tribute to all the staff who contributed to his success adding: “I’m highly delighted, humbled and truly thankful to receive such an honour. The award recognises not just my contribution, but also the work of all staff within the Training Department at SERC. I love my job at SERC, it is hugely rewarding to see students developing and progressing with additional qualifications, more confidence and hearing about their achievements.”

William is now looking forward to travelling to Buckingham Palace later in the year to collect his MBE.