<![CDATA[ <p style="text-align: justify;">Following the severe floods at the Bann Road, Castlewellan last year, representations were made to the DRD Roads Service by former Councillor Eamonn ONeill and South Down MLA Seán Rogers. 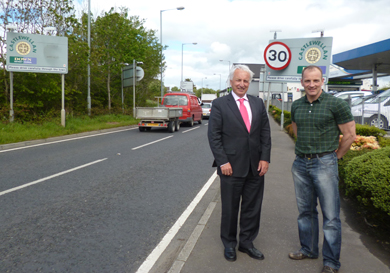 Since then a number of site meetings have taken place between the Roads Service and the SDLP and just last week Roads Service has agreed to develop a scheme to address the issue.

Local SDLP Candidate Shane King has said: “I welcome the meetings that have taken place and wish to thank Eamonn, Seán and Laura for all that has been done. Roads Service has at long last agreed that there is an issue, that they are responsible and are away to develop a plan which will address this.  This is progress.  I look forward to seeing the resolution on the ground in the near future.

Seán Rogers MLA said: “I have been out on site a number of times and it is evident that the section of road just before the Dublin /Bann Road junction has dropped and is in fact sloping towards the supermarket.  Senior Officials have agreed to draw up plans to deal with the situation and reduce the chance of similar flooding incidents happening again.  This has to be welcomed however funding has yet to be ring-fenced to finance it.

“I will continue to lobby the Roads Service for this much needed scheme as a similar situation cannot happen again. However, we are in a much better situation now as the Agency has finally admitted liability and agreed to move the matter forward.”