<![CDATA[ <p style="text-align: justify;">Last week an international group of 15 divers gathered in Strangford Lough to hunt for a strange quarry……nudibranchs. 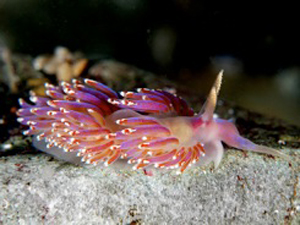 An amazing display of sea slugs will be on display during the Strangford Lough Maritime Festival at the Portaferry Marine Research Centre.[/caption]

These colourful frilly creatures are the hidden beauties of our local seas. They come in pink, green, orange, and every colour of the rainbow, and they are everywhere. But even in such bright hues, the slugs are mostly small. So patience and a steady hand on the camera is all that’s required to find them.

The Nudibranch Safari found more than 60 species of sea slugs in Strangford Lough, some of which may be new to science, and two that have never been found before in Strangford Lough. And new species were will being brought up in the last hours of the trip, so there are still more out there to be discovered. Visitors from Ireland, Norway, Sweden, England, Scotland and Wales used the labs in Queen’s University Marine Lab, in Portaferry, to photograph and identify their finds.

“There are about 112 species of nudibranchs known from Britain and Ireland, but some of these are confined to the south-west and a few to the north of Scotland” explained the organiser, expert diver and nudibranch scientist Bernard Picton. “The hydroids which many of these nudibranchs eat were very abundant, possibly because they are benefitting from lack of bottom fishing.” 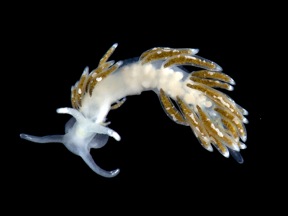 Cuthona pustulata – one of the 60 varieties of sea slugs in Strangford Lough.[/caption]

These aren’t your common or garden slugs. Like the lion on a tiny underwater safari, they are predators. Some sea slugs have the amazing ability to take the defences of their prey – poisonous chemical and sharp sting – and actually use them in the slug’s own body to fend off larger attackers. One species even takes the green parts of seaweed into its skin so the slug becomes photosynthetic.

Many of these amazing animals are on display to the public this weekend, in a rare opportunity to see them up close. The Queen’s University Marine Lab will have its annual Open Day on Saturday 31 May, during the Strangford Maritime Festival.

Admission is free from 11am – 4pm, to see the nudibranchs and many other incredible mini beasts from Strangford Lough.

Researchers from Queen’s University will be on hand to demonstrate professional scientific SCUBA diving kit, and explain what you can find on your own seashore safari.