<![CDATA[ <p style="text-align: justify;">LEADING Chamber Choir, Sciolto, is next to bring a mix of sacred and secular music inside the ancient walls of the Newtownards Priory. 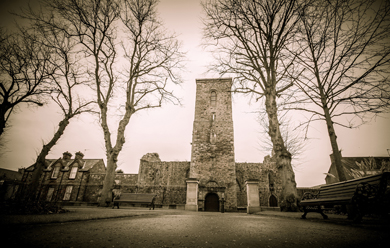 Sciolto are to perform in the Priory in Newtownards.[/caption]

The recital (12 May) at 8pm is the second in a series of musical performances in the unique venue which is not normally open to the public, and forms part of a programme of events from Ards Borough Council to mark the 400th anniversary of the granting of the first Royal Charter to ‘Newtowne’, a reward for the successful settlement of the lands by lowland Scot, Hugh Montgomery, in the early 17th century.

Sciolto, formed in 1996 by a group of like-minded singers who wished to explore the wide variety of choral music written for small chamber ensembles, will perform music from the 17th century with a smattering of work from more recent times.

Restored by Montgomery shortly after his arrival in Ards in 1606, the Priory became his home, his church and his burial place, and was also recorded as hosting 12-person choirs. This historical reference was the inspiration for the concerts, as Mayor of Ards, Alderman Hamilton Gregory, explained:

“The Priory is one of the few buildings remaining from that significant time in our history, is closely associated with Hugh Montgomery and indeed, with choral music, as the Montgomery manuscripts tell us. Where better then to hold this unique series of recitals, in the early evening, when the ancient walls will once again resonate to the sounds created by twelve voices and instruments? The Council is extremely grateful to the Northern Ireland Environment Agency for its permission to use the venue”.

Sciolto has contributed to broadcasts on BBC Radio 2, 3 and 4 and RTÉ Lyric FM, and has sung in a wide variety of contexts and venues including the splendid surroundings of St Catherine’s College, Cambridge, the ruins of Grey Abbey, Hillsborough Castle, on top of a parade float and has even been backing singers for a rock band!

Photo caption: Chamber Choir, Sciolto, will perform inside the ancient walls of the Priory this Sunday.