This game can be viewed as two points lost in their quest for the title but trailing 3 – 1 with only 15 minutes left the players battled to earn a hard fought draw to secure a point. Downpatrick started off the game in a positive fashion and should have been one up in the opening five minutes when top goalscorer raced into the box to shoot but unfortunately the ball went the wrong side of the post. 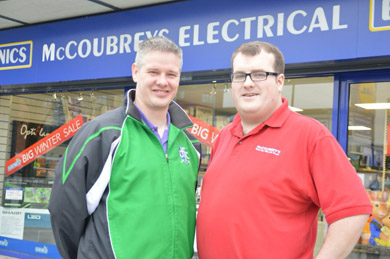 Saintfield took the lead on the half hour mark after a mix up at the back for Downpatrick saw a ball played back to keeper Robbie Hagan but before he could clear the ball the Saintfield striker nipped in to knock the ball into an empty net. Downpatrick almost got back on level terms straight away, McMahon took a quick free kick and found strike partner Shane Matheson who turned on a six pence and volleyed the ball but saw it canon of the cross bar to safety.

Both sides had chances in the opening five minutes of the second half but Downpatrick were off target and had their keeper Hagan to thank for keeping out AYC. Two substitutions early in the half saw some energy injected into the Downpatrick team with Michael Burns replacing Chris McDowell and Conaill Kerr coming on for Shane Matheson. Within five minutes substitute Burns headed in the equaliser after a free kick from Vincey Perry was flicked on by midfielder Paul Brady to winger Chris Perry who found Burns with an inch perfect cross to give the Saintfield keeper no chance.

The management team of Downpatrick had barely finished celebrating when they found their team behind again. Another mix up in the home sides defence saw the Saintfield striker ghost in unchallenged to put them 2 – 1 in front. Downpatrick made their final change on the hour mark when Neal Cunningham replaced Sean McMahon Senior.

However it was AYC who we’re looking more dangerous at this stage and they went further in front through rout one tactics. The visiting team keeper launched the ball from inside his own penalty area, the ball was allowed to bounce over the Downpatrick defence and the Saintfield striker lobbed the stranded Hagan to make it 3 – 1 to the visitors.

Credit to the Downpatrick team, instead of accepting defeat they didn’t give up and reduced the deficit to one goal with 15 minutes remaining. The home side won a free kick out wide which was swung in by Chris Perry and defender Blaine Connolly met the ball to send a powerful header into the net.

Downpatrick’s equaliser came from a corner which was played in low to the front post by Chris Perry, it was flicked on by Burns to the in rushing Cunningham who steered the ball past the keeper and a number of AYC defenders. Robbie Hagan was again the saviour when he saved a one on one chance for Saintfield with only minutes remaining to ensure his sides hard work for a point was worthwhile.