At the line James prevailed in 29.14 with Richard 11 seconds behind and Aaron a further 5 seconds further back in 3rd and first Junior to cross the line.

Catherine O’Connor 31.19 made it a double for the East Down club by taking the Ladies prize ahead of her Junior club mate Laura Gardiner. 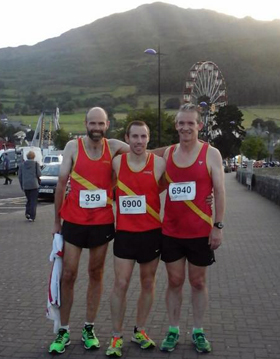 Raymond Stanex was first Over 35 to finish while Raymond Milligan made a welcome visit to the podium by lifting the Over 45 title while Ballydrain’s Norman Mawhinney maintained his stranglehold of the Over 55 category with a top 10 finish in 31.42. Niamh O’Connell took the Over 35 Ladies prize while Ballydrain’s Fiona Prue took the Over 45. First Lady Over 50 was Alison Carroll 41.40 and completed a unique family double with daughter Edie 35.35 who was first female Junior.

Thank You Afterwards participants and officials were treated to very welcome refreshments in the Corner Inn and thanks are extended to the owner and staff there, to PSNI officers who saw to the safety of the runners and to everyone who helped make the event a success. A special word of thanks to the staff of Tobar Mhuire Monastery for the use of their beautiful grounds which proved an ideal setting for the start and finish of the race.

EAST DOWN IN SPARKLING FORM IN CARLINGFORD 5K On Friday night Liam Keenan returned to one of his favourite battlegrounds in Carlingford for the Glenmore 5K road race. While he was the sole visitor last year he was accompanied by a formidable squad from East Down this time. That this was a highly talented group was subsequently borne out by a superb 3rd team place from the 44 participating teams, including the mighty Raheny Shamrocks!

LEITRIM 5 MILES After his exertions on Friday night in Carlingford, Benny Teer could have been forgiven for putting his feet up on Saturday prior to visiting Newcastle in the afternoon to see the Red Arrows. However, he arrived instead in Leitrim to defend the King of the Road crown which he has worn for the last 3 years.

Be that as it may – it is a super course, a real tester for anyone, but which is popular precisely because of that. It is indeed unfortunate that it is not better supported, though it may have been affected this year by the prospect of the Red Arrows appearing in Newcastle.

RED ARROWS? Ironically, technical problems prevented the arrival of the flying aces to the resort but those of us who ventured to Leitrim saw Red Arrows in abundance – I think they were actually orange but I was looking at them through sunglasses and they appeared red through the undusted lens – painted on the road to direct runners.

That’s another reason to go do Leitrim – the sun is always shining there on race day, even in March 2 years ago when the snow was hedged high along the route. And despite the terrain I managed the first mile in 9 minutes, which is as fast as I have run that distance in over 5 years. Admittedly my progress was all downhill after that even if the course was the opposite, but the point is it’s not any slower than anywhere else.

My fellow club members Lisa Miligan and Janine Murray who might give me an argument on that last point but with 41.27 and 43.12 times respectively do I need to say more? Cheryl Denvir too signified a return to form with a time of 36.31 and 3rd place in the Ladies competition.

And I met and ran a few miles with Darina Burns, in her first ever race, who could be very pleased with her time of 45.37 and her unwitting contribution to help the aged. Thank you Darina, I hope it is the start of a long and enjoyable running career for you.

WHAT NOW? So how do we hold onto this jewel in the crown of road races? I sincerely hope that everyone associated with it give it another chance next year, perhaps moving to a morning start might prove more popular? It also occurs to me that with 3 other 5 mile races all occurring in the North, East and South Down area within a 5 week period it might be possible to organise a Co. Down 5 Mile Road Race Team Championships with points not only for performance but for numbers participating.

The events would be the Crossgar, Leitrim, Killyleagh and Newtownards 5 Mile races and even if the local clubs, East Down AC, Crossgar Harriers, Newcastle AC, Murlough AC, Castlewellan and Leitrim Ladies only sent a fraction of their members, then all the races would top 100 runners, to everyone’s benefit.

So put it on your bucket list of things you MUST do before you die, just below the Mill Hill Mile and my top two 1. KEEP BREATHING and 2. All of my thinking OUTSIDE the box. Incidentally, anyone thinking of doing it after they die will not be allowed to compete. While Delirium Tremens and Plantar Fasciitis are treatable conditions, so far Rigor Mortis is not. Anyone turning up in a hearse or an urn will be refused an entry as your number is up and you have had your chip(s) Meantime I’m appealing to the hard working organisers to keep it on the list for next year and without wanting to interfere I’d be happy to talk to you about the proposed “championships”.

COMING THIS WEEK On Thursday night, the annual Darragh Cross Charity 10K race and 4 mile Fun Run takes place with registration from 6.00pm in the GAC Club. This is now a full 10K race, over a new course and promises to be an exciting night.

On Sunday 16th Bright Community Hall on the Balllynoe Rd, Downpatrick is the venue for the 10K Road Race and 5K Fun Run promoted by Bright GFC and Rossglass Co. FC with Registration from 10.00am and a new11.00 am start time Everyone welcome to both events.

CONGRATULATIONS TO KERRY Nothing to do with All Ireland Gaelic Football, this message is sent to Kerry O’Flaherty the local girl made good. Qualification for the World Championships in Beijing in two weeks time, not to mention getting a toehold on the ladder to Olympics in Rio next Summer, are superb achievements worthy of our admiration and respect.

Hard work and dedication have been the hallmark of your career for many years now and everyone in East Down AC wish you well. Even though you’re with Newcastle AC you’re one of us too we all feel we have a share in you. You have been a great ambassador for our sport, a smashing role model and we congratulate you on the glory which you have brought to this area. Go sock it to them Kerry, we’re with you all the way!