<![CDATA[THE current Rose of Tralee Nicola McEvoy from Cork visited Newcastle on a whistle-stop tour of County Down as the search for the next Rose has already begun. [caption id="attachment_36376" align="alignright" width="390"]<a href="http://www.downnews.co.uk/wp-content/uploads/2013/02/rose-of-tralee_2-copy.jpg"> 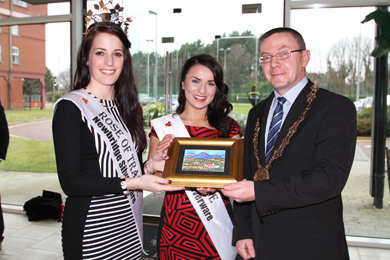 Rose of Tralee Nicola McEvoy, left, on a visit to the Slieve Donard Resort and Spa in Newcastle receives a presentation of a painting from Down District Council Chairman Councillor Mickey Coogan. Included is the current Down Rose, Una Matthews.[/caption] Speaking to Down News at the prestigious Slieve Donard Resort and Spa in Newcastle, Cork’s Nicola McEvoy (26) said: “This is the very first time I have been in the North of Ireland and it is so exciting for me. I love travelling. I work at the English School in Luxembourg and teach the children of the UK workers there in English. “We are now on the search for girls to come forward and put heir names in the hat to become the next Rose of Tralee. The finals take place in August 16-20. The Rose competition is a huge international success now and is great for Ireland. To qualify you just need to be living in your county for two years – it is really a celebration of about who you are. It’s not a beauty pageant. “In my role I am an ambassador for the Rose festival and I travel all over the world in my duties. My globetrotting has taken to me to as far as India in the search for the new Roses. [caption id="attachment_36377" align="alignleft" width="280"] 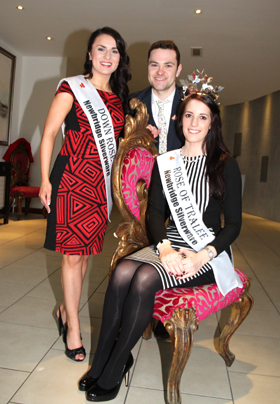 Rose of Tralee Nicola McEvoy, seated , with Co Down 2012 winner Una Matthews and escort Aidan Clarke pictured at their visit to the Slieve Donard Resort and Spa in Newcvastle.[/caption] “Basically there are 32 chosen altogether and the selection process then goes down to the final in August. The participants really do make friends with each other as they go through the process. It’s really about personality and who you are. The girls just all really develop during the competition and come into their own. My advice is just go for it! “Later on this year I will be meeting President Obama on my travels and this will be very exciting.” The Rose of Tralee contest began in 1959 and has grown from strength to strength and generates £7 million to the local Irish economy each year. Nicola said: “It is good for local business. The local County Roses do make a good contribution to the life in their communities. The main sponsor for the Rose competition is Newbridge Silverware from Co Kildare.” Down District Council Chairman, Independent Councillor Mickey Coogan, met with Rose Of Tralee Nicola McEvoy and Down Rose Una Matthews  at the Slieve Donard Resort and Spa in Newcastle. He said: ” I was delighted to meet with Nicola on her first visit to the North and delighted to get the chance to meet up again with Una Mathews who did Down proud in last year’s competition. They were heading off to the Hilton in Belfast as the search for this years Rose begins again. “These girls have a very busy schedule and they do a fantastic job representing their own Counties of Cork and Down and Ireland throughout the year. I presented Nicola who is from Cork with a painting by local artist Rosemary Watts from Bryansford. Nicola also met the Mayor of Newry and Mourne District, John McArdle at the Canal Court Hotel before enjoying a few fast laps around the Formula Karting Newry. She then made her way across the beautiful coastal Mourne Route to The Slieve Donard where she officially launched the search for the Down Rose with the Chairman of The Down District Council, Councillor Coogan. Newbridge Silverware, the lead sponsors of the Festival, will present the next Rose of Tralee with a range of handcrafted jewellery and homeware products. She will also receive a World Travel Prize worth €25,000 from Dublin Airport Authority, a year’s driving in a brand new car and much more. Nicola McEvoy, who was crowned as the 2012 Rose of Tralee last August, said: “2013 could be the year that a Rose from Down follows in the footsteps of three Belfast ladies -Therese Gillespie (1965), Veronica McCambridge (1973) and Marita Marron (1979) – and become the Rose of Tralee. Anyone who enters a Rose selection will never regret the experience of a lifetime in which they will make life-long friends and have the best fun along the way. Becoming the Rose of Tralee was a huge added bonus to what can only be described as the most exciting year of my life.” Current Down Rose, Una Matthews, selected the Southern Area Hospice as her chosen charity for the year and continues to fundraise for them. She commented, “The Rose of Tralee gives you a platform to select a charity, represent it on an international stage and fundraise for it throughout your year as the Rose. For me, this has been so rewarding and I look forward to continuing my fundraising efforts in the remaining months as Down’s Rose.” This year the Down Rose Centre have many events planned for the potential Roses some of which include a VIP Tour of Titanic Belfast, A Day at Dundalk Races, A Diamonds and Cocktail evening with one lucky winner taking away a diamond, an outdoor adventure day up the Mourne Mountains followed by a luxury afternoon tea and spa treatment. The Down Rose Selection will take place on Sunday 28 April in Slieve Donard Resort and Spa, Newcastle at 7pm but it’s not too late to put yourself forward. For moreinformation on how you could be the County Down Rose, please don’t hesitate in contacting us. Email us at downrose2011@gmail.com or call Gareth on 077868 37198.]]>