<![CDATA[ <p style="text-align: justify;" align="center">A deadly oyster disease is wiping  out oyster beds in Carlingford Lough and will cause millions of pounds worth of lost stock and make local workers redundant.

DARD Fisheries section has examined the situation and confirmed that a virus is active destroying the oyster beds. Kilkeel-based shellfish producer  Harold Henning who has a number of oyster beds this morning described the position as a “total wipeout”. Already oyster farmers are voicing calls for hardship assistance following handouts to hill farmers and fishermen because of  difficult  circumstances affecting their livelihoods due to adverse weather over the winter. 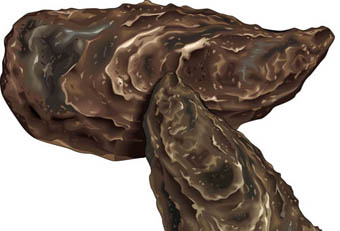 The Pacific Oyster – under threat in Carlingford Lough.[/caption]

SOUTH Down SDLP MLA Seán Rogers has spoken out in support of the “horrendous circumstances” that some local oyster farmers are facing.

Mr Rogers said: “I was shocked to hear and see first-hand the devastation to Oyster Farming on the northern side of Carlingford Lough.

“One farmer has lost 80% of his stock in just two days, which is essentially three years of hard work in often very difficult conditions, just gone.  It is assumed that these losses are linked to the unusually high water temperatures of late in Carlingford Lough. Last night’s average was 19 degrees.  The Department of Agriculture has confirmed that the OsHV Virus is present in Carlingford Lough but it appears to flourish in warmer water. Tests into the losses are ongoing at present.

We could potentially be looking at the total decimation of Oyster Farming as we know it in Carlingford Lough. This is a very serious situation.  These farmers need assistance and they need it fast in order to begin re-building their livelihoods.  I have made urgent representations to the Minister in support of these farmers.”

A DARD spokesperson said: “DARD can confirm an outbreak of OsHV1-µvar (Ostreid Herpes Virus) on one site in Carlingford Lough following a sample of dead Pacific Oysters (Crassostrea Gigas) showing positive results today when tested by the Agri- Food and Biosciences Institute (AFBI) in Dundonald.  There have been no reported mortalities in any other site on either side of the Lough. [caption id="attachment_41013" align="alignright" width="350"] 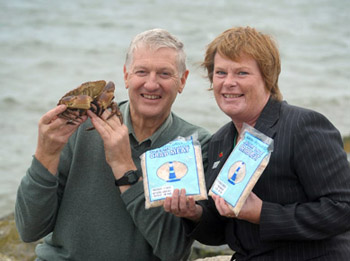 Major blow. Harold Henning, Director of Henning Brothers, Kilkeel, with Dr Vicky Kell, Invest NI Trade Director pictured two years ago as he won an export order for shellfish in Europe. (Photo by Simon Graham/Harrison Photography.)[/caption] “OsHV1-µvar originated in France and has been detected in Ireland since 2009 causing significant mortalities from time to time in Pacific oysters. The north of Ireland had a limited number of outbreaks but the virus has been widely detected in Lough Foyle, Carlingford Lough, Killough Bay and Strangford Lough. “Research to date has not identified any method to combat the mortalities, which appear to be linked to rising water temperatures.  The virus appears to lie latent until water temperatures reach 15-16ºC at which stage the oysters begin to die very quickly. Temperatures have risen to 20 C in recent days which has significantly reduced dissolved oxygen levels in shallow areas where oysters are grown. Such temperatures are not unusually warm, but combined with the presence of the virus, and calm weather which inhibits oxygen mixing into the water column, conditions have resulted in oyster mortalities. “There are no measures available for compensation or restocking through DARD or under European funding, however, DARD has assisted industry through the European Fisheries Fund for a project taken forward by CBAIT, the Cross-Border Aquaculture Initiative Team, in conjunction with Pacific oyster farmers.  The project “Advance Through Disease Control”, aims to compile baseline data for the Pacific oyster industry and investigate possible farming techniques to try to limit risk of spread of OsHV1-µvar. “The Pacific oyster industry produced 136.68 tonnes in 2011 and was valued at approximately £545,600.  The shellfish industry as a whole was estimated to value approximately £6,291,017.80 (includes mussels, oysters and scallops). “Invertebrate viruses are not known to affect humans and the Food Standards Agency is not aware of any reports of human illness associated with this virus. “DARD is sympathetic to producers affected by any disease outbreak and Fish Health Inspectorate are always available to offer advice and assistance. DARD is committed to maintaining our high fish health status and operates comprehensive disease control measures.”]]>