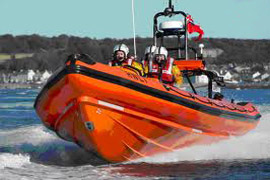 The RNLI made a major contribution to saving lives at sea in 2013.[/caption] RNLI Lifeboats continue dto save lives in 2013. The latest figures released for the year indicate Kilkeel and Newcastle stations had a total of 32 launches and rescued 15 people.  In addition to these figures the RNLI Lifeguard area for Newry and Mourne aided 41 people while County Down helped 42 people.

Cllr Laura Devlin (SDLP) said:  “The release of these figures is an opportune time to thank all those involved in providing this vital service to the area.  From street fundraisers, committee members  through to volunteer rescuers who often face treacherous  conditions, all must be congratulated on their much valued charitable work”.
Echoing the tribute paid by his SDLP colleague Cllr Devlin, Seán Rogers MLA added:  “I have no doubt that behind each of these figures lies a story of gratitude felt no only by the person rescued but their extended family circle.  Figures such as these remind us of our dependence on the good work of RNLI Lifeboats”.
]]>

SDLP Welcomes Clear Up At Omniplex In Downpatrick

Down Groups Scoop Support From Lottery To Fight Covid-19