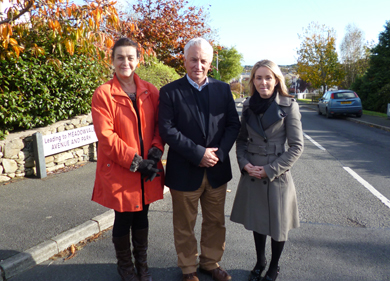 South Down MLA Seán Rogers said: “Since Summer we have been in discussions with various agencies regarding the very serious threat that the Japanese Knotweed poses to the Newcastle area.

“My concerns were heightened when I learned that this weed has been spotted on the local flood wall which was erected during the Burren River Flood Alleviation Scheme. “I wrote to the Rivers Agency and was advised that they were confident that the wall was of sound enough structure to cope with this weed. However following some research and the valuable information which my party colleague Cllr Carmel O’Boyle had furnished me with, I sought a meeting with Rivers Agency on site. “I availed of the services of Dr Catherine McGavigan from the School of Biological Science at Queen’s and Catherine kindly attended a meeting with Rivers Agency officials and ourselves. “As a result of this meeting the Rivers Agency have agreed to run a pilot in the area with a product that was suggested by Dr McGavigan.  I wish to thank Dr McGavigan to taking the time to come to Newcastle and I feel that her expertise in this area is invaluable.” Cllr Carmel O’Boyle who was at the meeting said, “This is a very positive step forward. I will continue to work closely with the Rivers Agency and have involved our Council Officers as well.  The way we treat this weed in Newcastle could lead the way in other areas.” Laura Devlin (Constituency Manager for Seán Rogers MLA) said, “I welcome the outcome of this meeting and am pleased that the Rivers Agency are now treating this weed with the concern that is needed. “]]>