<![CDATA[ <p style="text-align: justify;">South Down MP Margaret Ritchie speaking about progress in the Meningitis B vaccination programme,  said: “Following a long battle in Westminster  – on the floor of the House of Commons and in Committee Rooms around 13 months ago –  the British Government decided to press ahead with the Meningitis B vaccine for infants following the approval that was given by the government advisors in 2014 which stated that every child over two months old should be given the vaccine. 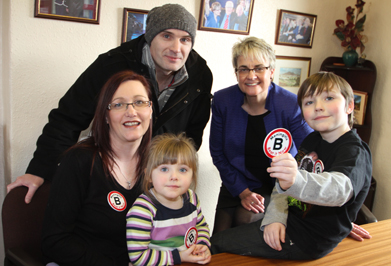 A long road: Pictured two years ago in Newcastle in the fight to have the new Meningitis B vacine adopted were South Down MP Margaret Ritchie, second right, with Rita, Chloe, Neal and Fionn Denvir from Newcastle.[/caption]

“Negotiations over cost had however delayed the unresolved process. The battle continued to ensure that the vaccine was eventually commissioned. For over 12 months families and the wider community have waited for the resolution to this issue. I personally raised this issue on the floor of the House of Commons at Health Questions last year.

“The announcement on the deal came last week from the Health Secretary in the Commons in a late evening session. The drug will now be added to the national childhood immunisation scheme, meaning babies will receive the first vaccine at two months old followed by further doses.

“At long last, there has been a deal between the British Government and Glaxo Smith Kline – the Pharmaceutical company.

“It is vitally important that this decision has now been made, indicating that the vaccine for Meningitis B has been commissioned and that families with young infants will receive the much needed vaccine. I hope that this will bring much earned relief for many families and that it will be an important preventative measure for young infants.

“Commendation and thanks must go to the Meningitis B organisation and to the many families throughout Northern Ireland and Britain who fought a long campaign for the approval and commissioning of this vaccine”, added Ms Ritchie.

Health Minister Jim Wells has announced that he has signed off on a Meningitis B (Men B) vaccine to be included as part of the routine childhood vaccination programme.

The announcement follows the conclusion of negotiations between the Department of Health in England and the vaccine manufacturer GlaxoSmithKline to secure the Men B vaccine at a cost effective price.

Mr Wells said: “Men B is an extremely serious illness that can cause devastating consequences. It can lead to septicaemia (blood poisoning) and around one in every 10 such cases is fatal. Sadly, it is infants and children aged under five years who are most affected. Early diagnosis and antibiotic treatment can lead to a full recovery, but about one in eight cases experience long-term health problems such as amputation, deafness, epilepsy and/or learning difficulties.

“I very much welcome the outcome of the negotiations to secure an effective, safe and cost-effective vaccine to protect against Men B. All four UK Health Ministers had previously accepted the JCVI recommendation to introduce a Men B vaccination programme, subject to the vaccine being procured at a cost effective price. This is very good news and I’m sure all prospective parents will welcome the introduction of a Men B vaccine to the routine childhood vaccination schedule.”

Since 2010 we have seen around 25 to 35 cases of Men B each year in Northern Ireland. Men B is now responsible for the vast majority of cases of invasive meningococcal disease in this country. In the past decade, on average over 1,000 confirmed cases of Men B disease have occurred annually in the UK, although the annual incidence has declined in recent years.