<![CDATA[ <p style="text-align: justify;">SDLP South Down MP Margaret Ritchie has been selected an an election convention to fight the upcoming Westminster election.

Margaret Ritchie, who has a wealth of political experience both within the SDLP, in South Down and the wider region of Northern Ireland as a former Minister for Social Development, MLA and local Councillor. Margaret was first elected as MP for South Down in 2010 following the retirement of Eddie McGrady MP. 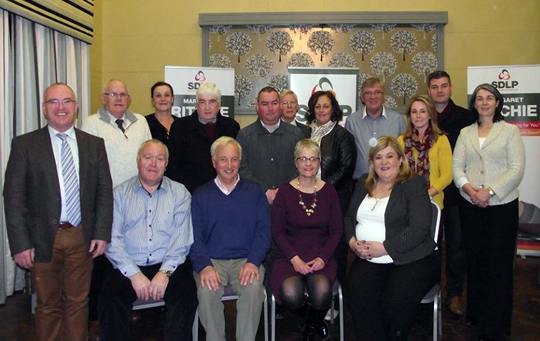 Ms Ritchie said just after the convention, “I am honoured and privileged to have been selected by my colleagues and friends in the SDLP in South Down to fight the Westminster election. I am pleased to have been given the opportunity by my colleagues, but was also delighted that the community of South Down elected me in May 2010 to represent their interests, requirements, needs and ambitions in Westminster. Lest anyone forgets, we in the SDLP will stand up for the rights of all within the community and will not allow those who wish to divide this community along sectarian lines to succeed.

“What I and my colleagues in the SDLP want is the ability to continue to put the needs of the people in South Down first.

“The SDLP firmly believes in working with communities and a wide spectrum of interests, both government departments, agencies and the community and voluntary sector. We want to continue to build economic prosperity, job creation and reconciliation for the benefit of all.

“As MP for South Down, I have kept the fundamental concepts of developing prosperity and reconciliation at the forefront of both my agenda, and the agenda of the Party in South Down over the last number of years.

“I have worked tirelessly on a cross community basis the length and breadth of South Down to promote, develop and build upon economic prosperity, job creation, reconciliation and the unity of all our people within the region and in Parliament.

“Above all, and at all times, I have challenged the Tory led government in Parliament against their cuts agenda to ensure that a better, more equitable, fair and just society is created for all – that still remains my goal and that of the SDLP.

“Throughout the last five years, I have provided representations on a range of issues both in the constituency of South Down and through taking my seat at Westminster to ensure that an economic and social framework is firmly established and built upon. Such an economic and social framework enables the issues of health service provision, job creation, education of our children; grants for regeneration and other community projects, farmers and our fisheries industries to be promoted and stimulated.

“In particular, through my work on the Environment, Food and Rural Affairs Committee, I have worked and promoted the interests of Farmers; Food Producers, Food processors and Fishermen – all of whom are important and central to the economic prosperity and development of South Down.

“Again, I am asking the people of South Down to provide me with their support on 7 May, through voting for the SDLP and myself, to help build upon the work I have done. I aim to improve the economic framework, to work with agencies and government departments to ensure that an extended range of health and medical services are provided in our hospitals, that the tourist infrastructure and our economy continues to grow built on our assets of patrician heritage and the Mournes.

“I will work hard so that our education and skills infrastructure in South Down is strengthened so that it delivers for all our young people. I will endeavour to ensure that the farming and fishing industries are sustained and developed, and above all, that the mechanisms are explored to develop new job opportunities in the public and private sector,” added Ms Ritchie.