Responding to complaints from road users in Downpatrick, both Ritchie and McGrath invite Ministers Durkan and Kennedy to Downpatrick to visit and inspect the situation so that solutions can be provided and implemented to address traffic management issues. 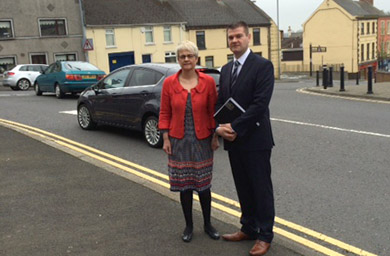 Downpatrick Councillor Colin McGrath said today that Roads Service must address traffic congestion at a busy roads junction in Downpatrick before consideration is given to any approval for planning applications for houses in the town.

Commenting further the Downpatrick councillor said: “There are a number of planning applications for further houses to be built on the Saul Road in Downpatrick with Planning Service which are awaiting consideration and assessment.

“However, Roads Service must give first priority and consideration to the traffic congestion at the Saul Street/Scotch Street junction before any approval is granted.

“There is a significant problem at this junction and motorists face serious waiting times and this is unacceptable.   For further planning applications for hundreds of homes to be considered without any consideration for upgrading this junction is folly and will result in further problems rather than the solutions required.

“I have written to both Planners and Roads Services and suggested that any planning approval be granted only upon the inclusion of junction upgrades at the site.”

South Down MP Margaret Ritchie joined Councillor McGrath in his call for junction upgrades adding: “Many people from the Saul Road are justifiably concerned about traffic flows, movements and housing density, and the impact that this additional housing will have upon this junction and upon traffic movements generally within Downpatrick.

“Such concerns were raised during the Area Plan process development away back in 2005/2006, and I am disappointed to see the requirements for a distributor road for the area (eastern by-pass) which was included in the plan have been removed without any prior consultation with the community.  This is unacceptable., and violates the principles of local democracy. The Planning Appeals Commission simply steam rollered over the Area Plan process with no recourse given to the Eastern Distributor Link Road.

“Along with Cllr McGrath, I will be directly raising the concerns of the people of Downpatrick, and particularly the residents of the Saul Road with the Ministers with responsibility for Planning and Roads Service, and have asked them to visit the area and see for themselves what the outcome of this  Planning Appeals Commission decision will bring not just to the Saul Road area,  but to traffic management in the whole area of Downpatrick”.