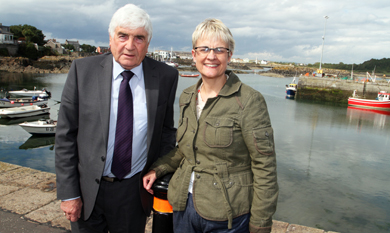 Councillor Dermot Curran with South Down MP Margaret Ritchie pictured at Ardglass harbour prior ro a meeting with local fishermen.[/caption]

SOUTH Down MP Margaret Ritchie (SDLP) has met with a group of fishermen from Ardglass with Councillor Dermot Curran to discuss improvements for the industry as well as enhanced conditions at the local harbour.

Ms Ritchie said: “Further to my meeting with local fishermen, I had raised the issue of the provision of a drying out berth in the harbour at Ardglass with the NI Fishery Harbour Authority. I am pleased to note that the Authority has confirmed its initial support for such a development.

“I understand that this proposal is at very early stages, and that the Authority is currently liaising with the relevant authorities to investigate if this can move forward, and obviously the issue of capital would have to be explored. It is welcome that these initial discussions are positive, and I am keen to assist with this project.

“In addition, the Northern Ireland Fishery Harbour Authority has agreed to undertake the maintenance of the existing CCTV  system at Ardglass Harbour, and this transfer is to take place after the CCTV in the fishmarket is installed.

“I would hope that this will lead to improved conditions at the Harbour,” added Ms Ritchie.