Although there was a reduced number of teams the quality was by no means diminished. The top two teams eventually rose to the top as Clonduff and RGU met in the Cup final. Both teams boasting an unbeaten run through the league stage. Indeed when the two teams met earlier in the day they could not be separated as they fought out a very entertaining draw. Unfortunately it was not to be for RGU in the final as Clonduff stepped up a gear and deservedly lifted the Cup. 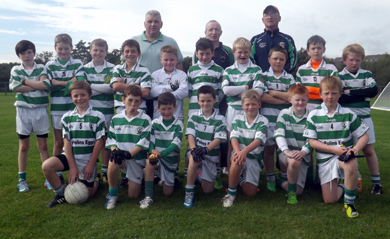 RGU U-10’s who lost out in the final of their home tournament on Saturday.[/caption]

Teconnaught and Loughinisland battled through to meet in the Shield final, but the Blues were too strong as they comfortably secured the trophy. The RGU B team also performed very well today, despite fielding a number  of U-8’s they managed to put up a terrific battle in most of their matches taking 2 draws along the way.

Saturday’s tournament marked the end of our series of Juvenile Tournaments at PTR this year. Some 750 players from 55 teams played in 137 matches with 8 teams finally lifting the trophies at the final whistle. But the winning teams are only part of the success of these days. We had teams from Tyrone, Antrim, Armagh and Down, boys and girls playing for their club, many for the first time, enjoying the day out with their friends and families; so many thanks to all the managers, mentors, parents and players from the U-8’s, U-10’s U-12 Girls and U-12 Boys who attended the various tournaments.

These days don’t happen without a dedicated number of people; people who work in the shop, set out the pitches, clean the dressing rooms, steward the car-park, referee the matches, organise the matches and finally pick up the litter and sweep up at the end of the day. So thank you to all who helped out.

Finally, the best news; over the Summer we have held various juvenile fundraisers, which along with a proportion of the entry fees from the tournaments, have raised the brilliant sum of £1,000 for our nominated charity this year, the Declan McMullan Fund. We hope to present this cheque at our Juvenile Presentation on 13th Oct. So many thanks to all who contributed to this very worthy fund.

For anyone who didn’t get a note last Saturday, the U-6’s are taking a break for a few weeks before moving indoors to Ballymote Sports Centre on Saturday 12 October, 10-11.30am We hope to see you all back then!

Seniors final match of the season will take place at PTR against Liatriom on Saturday 5 October at 4pm. Still a bit to play for as they need a point to avoid the chance of being dragged into the relegation play-offs.

The Juvenile Presentation will take place at RGU Clubrooms on Sunday 13 October at 1pm. All parents and children are invited to attend.

Calling all ceili dancers, singers and instrument players who are interested in taking part in Scór na nÓg. If you want to give it a try or know of someone who does, please contact Maria on 07912029095 for more details.

You will have seen RGU stalwarts Barry, JR, Judith and Joan pounding around the streets of Downpatrick and its all for a good cause as they are all doing the Dublin marathon on 28 October for the very worthwhile cause of NI Downs Syndrome Association in honour of their beautiful niece Hollie English. Coincidentally 28th October is also her birthday. If you wish to sponsor any of them please PM them on facebook or speak to any of them in person. Further to this there will also be a fundraiser to be held in the RGU club on Friday 4th October. There will be entertainment and loads of prizes to be won. So everyone is welcome, just make a donation at the door and buy some ballots. Hope to see lots of you there.

There will be a Macmillan Cancer Support coffee event in the RGU clubrooms on Sat 28 September from 1-4pm. There will be craft stalls, face painter and balloon modelling. It’s £2 for admission and free for kids. Everyone welcome to come down and support this very worthy charity.