<![CDATA[Everyone at the RGU was saddened by the passing last week of former Downpatrick and Down footballing great Paddy Galbraith after a short illness. 'Geordie was a member of the RGU 1972 and 1978 SFC wining teams. A teak tough defender he represented Down on numerous occasions in the 1970's. He was one player you were always glad to be on your side. Off the field. however, he was one of life's gentlemen with a wicked sense of humour. Our thoughts are with his family at this sad time. Mary Queen of the Gael pray for him. <p style="text-align: center;">**** 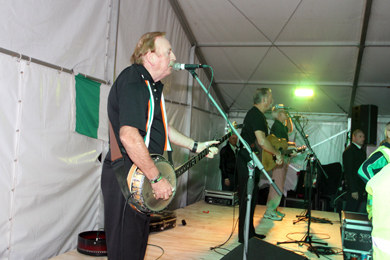 The Wolfe Tones playing to a packed audience at the RGU.[/caption] The inaugural RGU Festival Weekend has now passed and it has been a resounding success writes John Murphy. There were four nights of entertainment with events and activities for all age groups and interests, from zumba and magicians to the Wolfe Tones and George Jones. A very eclectic mix! The highlight was undoubtedly Saturday night when the Wolfe Tones played to a capacity crowd in the Marquee. It was all hands to the decks as everyone pitched to make this sure this was a thoroughly memorable event. Thank you to all who helped, contributed and attended. Watch this space as plans are already afoot for next year. The Seniors had a bit of a setback in the league when a second half comeback fell short as they lost to Ballyholland by a pt. Next up is a winner takes all match against Loughinisland in the Championship on Mon night at 8.30pm in Newcastle.

Check out the LINK TO THE DOWN NEWS PHOTO ALBUM

The U-14’s continue on in their Championship with 3 wins out of 4 in the round robin. Next up is a semi-final against Bredagh on 7 Sept. The U-16’s travel to Newry on Thursday night to take on Shamrocks in the first round of the Championship. The Minors dropped out of the Championship after a home defeat to Mayobridge. The U-14 Girls are away to Carryduff on Sunday at 12.30pm whilst 16 teams battle it out on Saturday at PTR in the U-12 Girls Tournament. Please note the weekly Lotto will be held on Monday nights for the next two weeks, the Monday dates being 19 August and 26 August.  The draw will take place at 8.00pm  each Monday night.  The next Lotto taking place on a Sunday night will be 1 September.  Lotto results will be available on our Facebook page. If you have any difficulty with this please ring Colm McNeill on 07815 839630]]>

November 24, 2020
We use cookies to ensure that we give you the best experience on our website. If you continue to use this site we will assume that you are happy with it.Ok