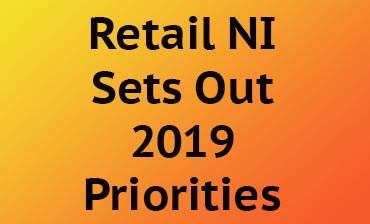 Retail NI has set out its priorities for 2019.

The business organisation, which has 1800 members, is approaching its twentieth year and says that Brexit, local government elections, City Deals and retail modernisation are among its priorities.

Retail NI CEO Glyn Roberts said: “2019 will be a critical year for Northern Ireland and its economy. Brexit, no Stormont Government for a second year and the reconstruction of the retail sector and the High Street are all huge challenges.

“Retail NI’s immediate priority is to support efforts to secure the Prime Minister’s withdrawal deal and to avoid the absolute disaster of Northern Ireland crashing out of the EU, with no deal. This is the biggest economic challenge since the second World War”

“With no Government in place for the second year running, Northern Ireland is in danger of becoming an international laughing stock. This is hugely disruptive for the economy.

“With much needed decisions not being made on reform of business rates, infrastructure investment, addressing an ever growing skills gap and modernisation of our town centres, Northern Ireland is not just lagging behind the rest of the UK and Ireland, it is in real danger of being left behind internationally.

“Local Government elections take place in May and Retail NI has already hit the ground running with the publication of our detailed report, ‘Regeneration NI’ which sets out a comprehensive plan to create 21st Century town and city centres.

“The regeneration of our town and city centres needs to be the top priority of our Local Councils and we will be engaging with them and the local political parties ahead of the Elections.

“Retail in 2019 will see an even faster period of rapid change and reconstruction.

“This change will not all be good and we still see some more significant large retail casualties in 2019. However we will also see the creation of more confident and dynamic independent retailers, who will be at the cutting edge of a new retail sector, leading toward 21st century town High Streets.”