Six young people from across Northern Ireland are set to follow in the footsteps of Liam Neeson and Adrian Dunbar to tread the boards as they start drama school this autumn. 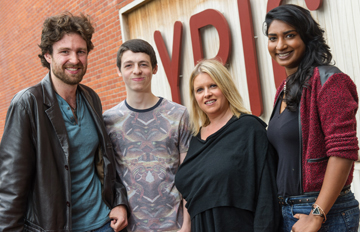 Drama students from the Lyric Drama Studio have won places in high level courses in the UK and Ireland. [/caption]

Anthony Boyle (18) from Belfast and 22-year-old Thomas Finnegan, from Newry won places at the prestigious Royal Welsh College of Music and Drama, recently rated the top drama school in the UK by The Guardian University League Tables. Tripti Tripuraneni (21) from Belfast is taking up a place at the Guildhall School of Music & Drama and Patrick Strain, also 21, from Newtownards is heading to East 15 Drama School in London, where the Lyric’s own Artistic Director, Richard Croxford trained.

Adele Gribbon (20) and 23-year-old Paul Livingstone, both from Belfast, successfully auditioned for The Lir, Ireland’s National Academy of Dramatic Art at Trinity College in Dublin.

Tripti said: “I had a great time doing the Lyric Drama Studio, I made some great friends and contacts in the industry. The knowledge I gained was invaluable and it has prepared me well for my time at drama school, I would recommend it to any young person considering a career in acting.”

Philip Crawford, Creative Learning Coordinator at the Lyric, said: “I am delighted that so many of our young people have applied to drama schools this year and absolutely thrilled that six have secured places at prestigious institutions. I have no doubt that the training we provided in the Drama Studio and the commitment they made to the course has been instrumental to their success.”

The Lyric Drama Studio offers young people, aged 18-25, a chance to experience training in acting at a professional level. The ethos is to develop the attitude that acting is a craft which needs to be honed and that this involves a lifelong process of learning.

The deadline is fast approaching for applications to this year’s Drama Studio (Sat 10 August) and the Lyric is keen to attract students from across Northern Ireland who have a serious desire to pursue a career in acting.

Over 60 aspiring actors auditioned for a place on the course last year. Twelve were successful.

The course runs on Saturdays from September until March and culminates in a production performed at the Lyric Theatre to the public. Workshops are rigorous and intensive – a high degree of commitment is expected.

All the tutors on the course are practising theatre professionals with extensive experience.

Students are supported through the process of applying to and auditioning for drama schools as well as giving them a taste of what they might expect on a professional training course. Not everyone will end up deciding to pursue a career in professional theatre, but applicants should have a serious intention to investigate the possibility.

Application forms for next year’s course can be downloaded from www.lyrictheatre.co.uk/learning under Lyric Drama Studio. Please note the closing date is Saturday 10 August at 5pm.