With attentions slowing turning towards the beginning of the flat season, starting today at the Curragh for the ‘Irish Lincolnshire’, we take the chance to look at one pf the remaining jumps fixtures in the form of this competitive Sunday card at Downpatrick, with the feature being the ‘Ulster Grand National.’ the Co. Down track’s highlight of the season writes Cormac McCavera. 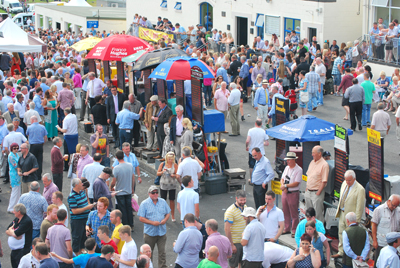 There will be an excellent crowd of spectators in Downpatrick for the meeting on Sunday 23 March with the Ulster National.[/caption]

The stand out pick in this one is the Gordon Elliot trained Un Beau Matin, who has been tremendously consistent all season but falling short in the winning stakes, recording three seconds and a third last time, in his last 4 outings. Be it, the last 2 runs were in Grade 2 company, this opportunity is a drop in class and with the booking of Paul Carberry, intention is definitely there to return him to winning ways.

Gordon Elliot has a fantastic record in this race, have trained the winner in his last two running’s, I fully expect the (136 top rated) Gigginstown owned gelding to prevail and complete the hat trick. Opposition comes in the form of the Mark Bolger ride – Gimil’s Rock, bred from Rock Of Gibraltar, he has already won over todays distance but has been lightly raced this term, this may play to his strengths and could be EW value coming up the hill on the home turn, but fully expect him to be chasing home Un Beau Matin.

Lines up to be a competitive fare, with the Arthur Moore trained Back Off Mate, the most notable. He has been acquitting himself very handily in stronger run handicaps, most recently finishing a strong fifth behind the exciting prospect Art Of payroll last time out at Leopardstown. Surely that should stand him well in this contest to be thereabouts come the business end of things. Biggest danger comes from the 5yr old Gold Not Silver, with the current Gold Cup winning jockey, Davy Russell at the reins. He is in receipt of 8lb from Back Off Mate, which should help to see if he can regain some form after a disappointing run last time out at Navan.

Imperial Joey can’t be overlooked, having previous C&D form here, but the extra few years on above young pretenders may be too much. EW value may be found in the form of Maple Valley Gold, if the last few runs can be excused, along with success at the track in the recent past, may just be enough to hold out for a top 3 finish.

The showpiece in Downpatrick’s racing calendar, has attracted a large competitive field to compete over the extended distance. Jimmy The Hat grabs the appeal in this one, having showed real progression since joining Gordon Elliot’s yard and the eight year old could be open to more improvement over this longer trip. With a full 13lbs in hand on the 11-12 top weighted Quiscover Fontaine, running in the silks of JP McManus. He will be looking to record back to back victories, having won a fortnight ago. The main danger is the likely favourite Kylecrue who has already secured previous course form. Although 8lbs higher in the rating than Jimmy The Hat, his form seems to be in an upward curve, with the inform Ger Fox doing the steering this surely can be overcome. The outcome will come down to the top two in the market but I will side with Hidden Horizons to be among the places at around 10/1, to be the EW value.

Hazzard Calls For Mental Health Back Up For Health Workers