A police car has been destroyed in an attack on the police in Kilkeel during a domestic dispute when they went into a home in the Newry Street area of the town. 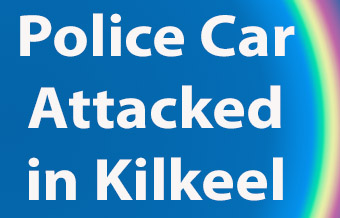 Superintendent Jane Humphries, District Commander for Newry Mourne and Down said: “Last night one of our police cars came under attack whilst officers were attending a call for service from a member of the public.  The car was parked in the street when the rear window was smashed and the boot area set on fire, causing considerable damage.  As a result we now have one less police vehicle to patrol the area to keep people safe.

“This type of wanton destruction is in no way a reflection on the community in Kilkeel, who are very supportive of police.  The perpetrator or perpetrators  do not speak for anyone but themselves.  Their actions only serve to damage and hurt the very community they live amongst.  No-one wants this.

“I would like to reassure the people of Kilkeel there will be a full and robust investigation to identify and bring those who are responsible before the courts.  There is no place in a civilised community for this type of behaviour.

“I would appeal to anyone who has any information that could assist us with our investigation to contact police at Ardmore on the non-emergency number 101, quoting reference number 1373 04/03/19.

“Alternatively, information can also be provided to the independent charity Crimestoppers on 0800 555 111, which is 100% anonymous and gives people the power to speak up and stop crime.”

DUP Mourne’s Councillor Glynn Hanna commenting on the incident said: “It is sad that a police car was destroyed in this incident in Kilkeel. There is no excuse for the destruction of public property.

“The police were serving the community and this is an absolute disgrace. A police car is a very expensive item and police funds like any another government department are under pressure as it is. I would urge calm in this instance and hope that everyone fully cooperates with the police.”