Frankie was unable to attend the red-carpet event because he is currently performing at the Lyric Theatre in Brian Friel’s poetic play, Molly Sweeney, but watched the awards ceremony from home. 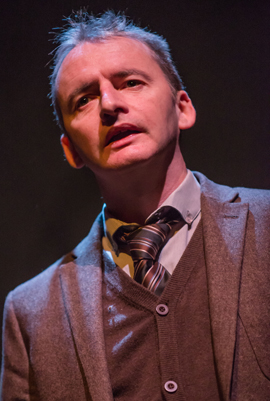 Frankie McCafferty who played the role of a barman in Philomena with scenes shot in the Dufferin Arms in Killyleagh. [/caption]

He said: “I’m delighted that the script has received this prestigious award,” he said. “It was a very good script, very subtle, not unlike Molly Sweeney which deals with very delicate and emotive issues and still manages to do that with humour and gravitas.”

Frankie plays a barman in Philomena, which was filmed in the Dufferin Arms, in Killyleagh, Co Down, with another well-known Belfast actor/playwright Marie Jones.

“It was great to work with Dame Judi Dench and Steve Coogan. Judi is famously down to earth and friendly, and Steve is also very funny,” said Frankie.

The success of the film, Frankie said, reflects the strength of the film and television industry in Northern Ireland.

“I’m in a film by Marie Jones called Shooting for Socrates which is due out this May. It’s a comedy about the 1986 Northern Ireland World Cup campaign in Mexico. We hope to see it at the BAFTAs next year!”

Frankie added that the burgeoning film industry owes a lot to the strength of local theatre.

“We depend on the Lyric and various independent theatre companies in Northern Ireland to keep actors and creatives in employment and hone our skills, so it is vital audiences continue to support the local arts scene,” he said.

Frankie is currently captivating audiences in the first ever professional production of Molly Sweeney in Northern Ireland. The critically acclaimed play is a co-production from the Lyric Theatre, Belfast and Print Room, London.

Blind since infancy, this poetic tale revolves around a woman who is persuaded to have an operation to restore her sight. Her husband Frank is convinced she has nothing to lose; her ophthalmologist Mr Rice (played by Frankie) is not so sure. Through a journey of memory, hope and despair, the play begs us to not only see, but also understand other people’s points of view.

Molly Sweeney is part of a Brian Friel double bill at the Lyric Theatre which is also stagingPhiladelphia, Here I Come! as part of a celebration of the Irish playwright’s 85th birthday this year.

Molly Sweeney will then tour to the following venues:

Molly Sweeney is currently running in the Naughton Studio of the Lyric Theatre until 8 March 2014; Tue to Sat 8pm; weekend matinees at 3pm. Tickets from £10 to £16. For more information on the Lyric’s season or to book, go to www.lyrictheatre.co.uk or contact the Box Office on (028) 9038 1081.