<![CDATA[ <p style="text-align: justify;">Dundrum comedian and TV and radio personality Patrick Kielty returned to his old school last week to launch their 80/800 Club, a fundraising initiative to help the school’s newly formed Parent’s and Friends’ Association (Red High PFA) raise funds to support activities in the school outside the classroom. 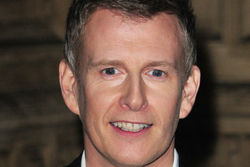 St Patrick Grammar School is celebrating its eightieth anniversary year and the PFA has organised an 800-club draw and in keeping with the 80th anniversary theme, there are 80 prizes up for grabs over the course of the next eight months with a top prize in each monthly draw of £800. Tickets cost £80 each and the draw culminates with a grand prize draw on June 21 where the top prize is a 5-door family car.

Mal McGrady, a former Red High pupil and current parent chairing the PFA, said: “We are very grateful to the many local businesses and in particular Charlie Bell, of Bells Crossgar, who have very kindly agreed to support us in the draws. Alongside the monthly cash prizes we now have over 30 spot prizes which will be drawn among the 800 members – 80 prizes in total, giving all participants a one in ten chance of being a winner.”

Patrick’s visit to the school was his first since the school moved to its new premises and he was very impressed with the changes – in particular the facilities for drama, music and PE. A former All–Ireland winning goal keeper with the senior school GAA team, Patrick explained to the Performing Arts and Media students: “I am delighted that the new sport facilities have been named after my former PE teacher Mr Pat O’Hare, the man who kickstarted my career in show business. 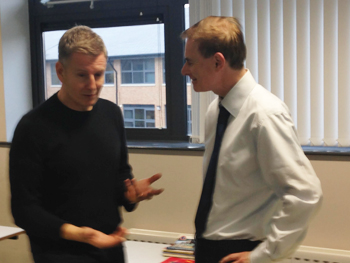 “Pat O’Hare not only managed the McLarnon squad he also organised the Christmas concert. He made it very simple for me – do a stand-up routine in the concert or get dropped from the squad. I did the concert, let six in at the next match and got dropped anyway.”

In a lively and entertaining session, Paddy offered the students advice for success in the world of media and drama speaking candidly about the realities of the industry and movingly about his role presenting the Special Olympics as the highlight of his varied career. He said: “At the time you don’t quite get just how significant it all is. You know you’re sharing a stage with Nelson Mandela but it was only when I was driving home to Dundrum that it really hit me as I drove through all the places that had hosted the athletes that what an honour it had been”.

Before leaving the school, Paddy made an impromptu video for the school’s Facebook page urging people to support the PFA and buy a ticket – in his own inimitable way!

School Principal, Sean Sloan, was full of praise for the returning student, and said: “Given that Patrick spends a great deal of time in America, we were delighted he could find the time to support the PFA. He was exceptionally generous with the students in terms not only of the advice he offered but also in posing for ‘selfies’ and writing autographs. There was a real buzz in the building and those teachers who had taught Patrick were all delighted to see him back.”